How a 'Flying Jug' Symbolized US Airpower in WWII 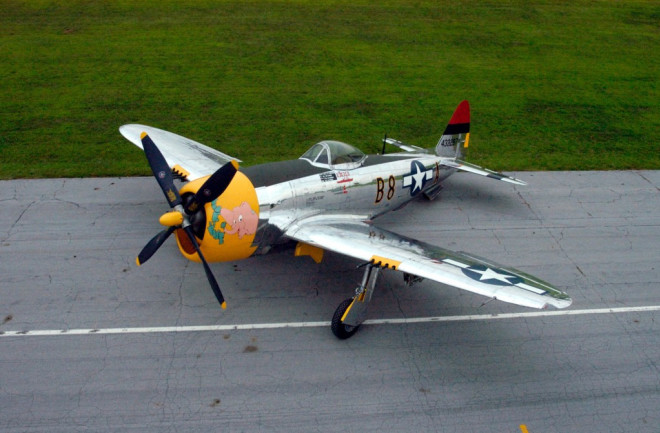 Republic P-47D at the National Museum of the United States Air Force. Credit: U.S. Air Force Toward the end of the 1998 film "Saving Private Ryan," American soldiers played by actors Matt Damon and Tom Hanks witness U.S. fighter aircraft swooping to their rescue. "They're P-51s, sir, tank busters!" Damon exclaims. In reality, the fighter aircraft swooping to the rescue of embattled U.S. infantrymen would more likely have been the P-47 Thunderbolt, a stocky aircraft with the unflattering nickname of the "flying jug." During the aircraft's 75th anniversary, it's worth remembering how the P-47 came to symbolize U.S. airpower's contribution to victory in World War II. The U.S. Army Air Force introduced the Republic P-47 Thunderbolt to protect U.S. bombers flying deep into enemy territory over occupied Europe. By the end of World War II, the P-47 had helped the Allies win air superiority over Europe by driving German fighters from the skies and carrying out crucial attack missions on ground targets such as supply trains, troop concentrations and German airfields. The P-47 also become the most produced U.S. fighter aircraft of the war. A strong belief in airpower meant the U.S. military devoted huge amounts of resources to making the P-47 and other aircraft. The U.S. Army spent $36 billion on aircraft as opposed to $6 billion on tanks during the main period of U.S. wartime involvement stretching from 1941 to 1945. That meant the U.S. Army spent almost six times as much on warplanes as opposed to producing tanks. The P-47 in particular represented one of the most expensive single-engine fighter aircraft with an average price tag of $85,578 per aircraft in 1944 dollars. https://www.youtube.com/watch?v=zlUrAxY-i3w But the U.S. investment in the P-47 as a cornerstone of its airpower paid off, according to the National Museum of the U.S. Air Force. Based on a series of fighter aircraft designed by Russian émigrés Alexander de Seversky and Alexander Kartveli, the P-47 became known as a rugged fighter aircraft capable of taking extreme punishment due to its armor and design. Its heavy frame earned it the nickname of the "Juggernaut," which was eventually shortened to the "Jug." On June 26, 1943, a U.S. pilot named Robert Johnson flying a P-47 took a savage mauling from several German fighter aircraft. As Johnson nursed his damaged aircraft back toward the safety of England, a German Fw-190 fighter came in behind the battered P-47 and raked it with machine gun bullets during three firing passes. When the German pilot had used up all his ammunition, he waggled his wings in salute to Johnson and took off. Somehow Johnson managed to fly his P-47 all the way back to England and land it at an airfield. An article by the Cradle of Aviation Museum describes how much damage Johnson's P-47 withstood:

Slowly, Johnson gathers his wits and removing his parachute, squeezes out of the shattered canopy. Once on the ground he realizes the extent of the damage. Not only to the plane, but to himself. A bullet had nicked his nose. His hands were bleeding from the shrapnel of 20 mm shells that exploded in the cockpit. Two 7.92 mm rounds had hit him in his leg. 21 holes from 20 mm shells are counted in the airframe. He quits counting bullet holes when he reaches 100. It seems as if every square foot of the fighter has a hole in it.

But the P-47 could dish out as much damage as it received with its eight .50 caliber machine guns. Thunderbolt pilots achieved a kill ratio of 4.67:1 in combat against enemy aircraft during the war, according to the Smithsonian National Air and Space Museum. In the European air war, the P-47 destroyed more than 7,000 enemy aircraft. More than half were shot down during aerial combat; the rest were destroyed on the ground during ground attack missions. Earlier models of the P-47 could only escort U.S. bombers partway to most targets in Europe before having to turn back. That range limitation of the P-47 helps explain why the U.S. Army Air Force eventually turned to the P-51 Mustang as its main escort fighter for the bombers. The P-51 went on to become celebrated as the finest air superiority fighter produced by the U.S. during the war. But a longer-range version of the P-47, called the P-47N, used internal fuel tanks to achieve the range necessary to escort U.S. B-29 bombers during raids on Japan during the last days of the Pacific campaign.

North American P-51D Mustang at the National Museum of the United States Air Force. The P-51's sleek airframe stands in contrast with the P-47's bulkier appearance. Credit: U.S. Air Force In the popular imagination, the P-51 Mustang's lighter weight and sleek silhouette looks bred for speed in a way that the ungainly P-47 "Jug" does not. No wonder director Steven Spielberg chose P-51s instead of P-47s as the tank-busting airpower saviors of "Saving Private Ryan." Still, the P-47 historically played a much bigger role in ground attack missions such as the one portrayed in "Saving Private Ryan." After the P-51 Mustangs took over more of the bomber escort duties, the P-47 Thunderbolt excelled as the main U.S. fighter aircraft assigned to conduct ground attack missions, according to statistics listed by the Smithsonian National Air and Space Museum. Starting from the D-Day invasion of Normandy on June 6, 1944 and until Victory in Europe day on May 7, 1944, Thunderbolt pilots destroyed tens of thousands of ground vehicles that included:

The American Airpower Museum in Farmingdale, New York held an exhibition marking the 75th anniversary of the P-47 Thunderbolt during Memorial Day weekend. It's an anniversary that few people other than aviation enthusiasts and World War II history buffs might ordinarily remember. But tragedy forced the anniversary into news headlines when a vintage P-47 Thunderbolt piloted by William Gordon, a veteran pilot, crashed into the Hudson River near the Manhattan shoreline on May 28, according to the New York Times. Gordon was killed in the crash. The New York Police Department and Army Corps of Engineers worked together to hoist the aircraft from the river. “When the plane came out, ironically, it was in amazing condition,” said Mike Cocchi, a detective diver with the New York Police Department, in a Newsday interview. “It really was a strong plane.”