How a Daredevil Managed to Ride a Motorcycle On the Ocean 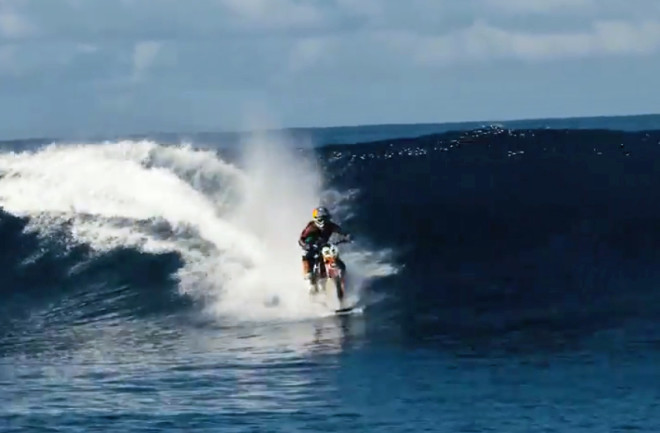 (Credit: DC Shoes/YouTube) Motorcycle stunts have come a long way from the circus stunts of yesteryear, jumping over snakes or through hoops of fire. But until recently, there was one place they hadn't gone: the ocean. That was, until Aussie daredevil and surfer Robbie Maddison recently released his 4-minute clip of riding a modified motorcycle on the waves of Tahiti. It’s a jaw-dropping stunt that redefines what we thought was possible, but it isn’t a miracle. It required a lot of patience, practice, and physics. Here’s how he did it.

Motorcross bikes don’t float, as a rule, and combustion engines and water don’t mix. So the first step for Maddison was to keep his bike as dry as possible while surfing a wave. Maddison’s team fitted his KTM 250 SX with a rear paddle tire and added skis that wrapped around the front and rear tires, in order to make the machine buoyant. Simple, right? Well, according to

the design was extremely finicky and even minor design adjustments could throw the whole thing off. For example, the original aluminum ski that worked on test runs in Idaho was too easily deformed with rocks kicked up by the bike in Tahiti, so they had to improvise. Maddison’s team went through 12 iterations of the front ski before settling on a plastic composite material for the winning design. The front ski had fins on the bottom to provide some steering control while on the water. Mechanics also added an inflatable device onto his bike to keep it from sinking if he needed to bail, and stuffed foam into the air intake to prevent the bike from taking in water. In all, his team spent 5,000 man-hours hammering out the final design of the bike.

Of course, riding vehicles across a very shallow pool of water isn't new: it’s called aquaplaning. When you aquaplane, water pressure in front of the wheel forces a wedge of water beneath the leading edge. This causes the tire to lift and ride on water. In unmodified machines, if the vehicle is going fast enough, the tires will ride along the surface of the water. You may have at one time aquaplaned in your vehicle while driving on the highway in rainy conditions.

(Credit: Red Bull/YouTube) Maddison’s bike modifications, combined with very high speeds, helped him maintain lift from the water for a longer period of time, allowing him to pull off his amazing stunt. Still, it wasn’t easy. Maddison told Surfer magazine:

The thing that sticks with me the most after that whole experience was how physically demanding it was. Honestly, I really thought that getting the right wave would have been easier. [Laughs] I don’t think the photos or video show how physical it was. You can’t see that when the wave broke right behind me, I honestly thought that might be the end of my life.

In other words: Kids, don’t try this at home.