Hot Fusion in a Can

Richard Siemen, a physicist at Los Alamos National Laboratory, thinks he's found a way to harness the nuclear fusion reactions that power the sun— and do it with a device not much bigger than a beer can. The long-standing obstacle to fusion power is that atomic nuclei strongly repel one another, and it takes some heavy-handed technology to bring them together. So far, after spending decades and billions of dollars on warehouse-sized reactors, researchers have yet to extract enough energy to power a flashlight. Siemen hopes to succeed where others failed by injecting heated and magnetized hydrogen into a 10-inch-long, 31/2-inch-wide aluminum cylinder and then shooting a 10- million-amp current into the can, which collapses and crushes its contents. Under those conditions, Siemen theorizes, the hydrogen should fuse, producing helium and a flood of high-speed neutrons whose energy can be converted to electricity. So far, he has imploded a can but has not achieved nuclear burning. "Within 20 years, we could have a demonstration unit that would cost less than a billion dollars," he says. In the fusion world, that would qualify as a real breakthrough. 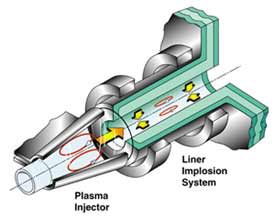 A path to hydrogen fusion: Hot, magnetized plasma is injected into a cylindrical chamber where electric current causes the liner to implode violently. Photo by Los Alamos National Laboratory