Despite the misconception among certain pop culture icons that butter is a carb, butter, like other fats and oils, is a lipid. Broadly defined, lipids are any molecules that have hydrophobic, or water repelling, characteristics. In contrast to simple molecules like water (H20) or sugar (C6H12O6), butter does not have one molecular formula; rather, it is a mixture of triglycerides. Here is what a triglyceride looks like [1]: 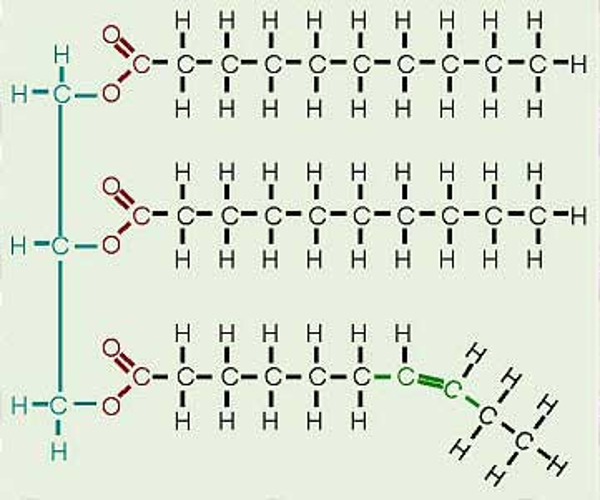 In addition to all these lipids, surprisingly, butter contains water. While oil and water don’t normally mix, in butter, tiny microscopic water droplets are dispersed within the fat. This is commonly known as a water-in-oil emulsion. An emulsion is any mixture of two liquids that don’t usually mix. The opposite of a water-in-oil emulsion would be an oil-in-water emulsion in which oil droplets are entrapped within water. To understand the secret of how butter can be made of two immiscible liquids, we need to delve back into the molecular structure. Butter is made from the cream, which has a higher fat content (15-25%) than milk (5 – 10%) [3]. In milk and cream, which are oil-in-water emulsions, the fatty triglycerides stay suspended in liquid because they are encapsulated in tiny fatty spheres or globules. Each globule is surrounded by a nanoscopically thin layer of phospolipids and stabilizing proteins. Phospholipds have hydrophobic lipid tails that love to repel water; they also have hydrophilic, or water loving, heads that contain a phosphate group (thus the name, phospho-lipid). Here is a picture of a phospholipid [1]: 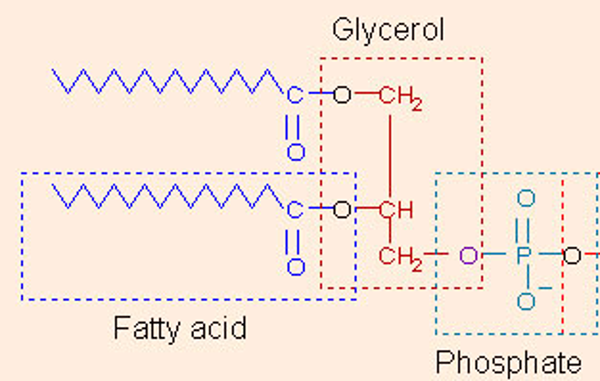 The phospholipids organize themselves in a thin layer so that the water repelling hydrophobic portions are aligned with the fatty acid chains while the water loving hydrophilic heads interact with the milk liquid. This allows the fats to remain dissolved in the milk and float around like little water balloons.

Now, that we have talked about the structure of butter, how to get from cream to butter? (Remember: milk and cream are oil-in-water emulsions and butter is a water-in-oil emulsion.) The oil-in-water emulsion of the cream is reversed into a water-in-oil emulsion in butter. During the churning or mixing process of butter making, the fatty globules in the cream break open to release the entrapped fat molecules. The hydrophobic fat molecules clump together and mix to form larger fat globules that coalesce into larger solid fat droplets. This processes pushes out the liquid portion and the solid portion becomes the butter. Since these types of fat molecules typically melt at temperatures of 30 to 41°C (86 to 106°F), this means that at cool temperatures below approximately 39°F (4°C), the remaining liquid gets trapped within the solid fat matrix and is unable to separate out of the butter [5].

Milk Fat globule. (A) Diagram of the phosopholipid layer surrounding a fat globule [3]. (B) Cryo-electron microscopy image of a fat globule [4]. The scale bars are 0.1 μm. 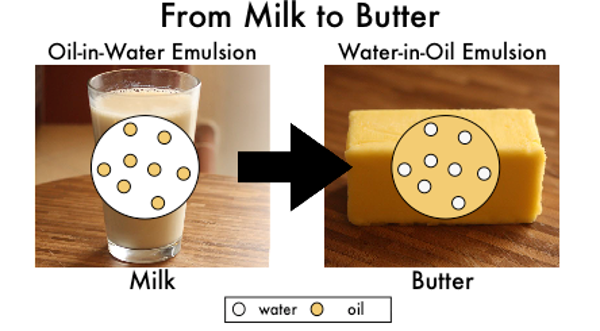 Below is a recipe for making your own homemade butter. You don’t need fancy equipment or churners like your ancestors used; a well-sealed glass jar works wonders. The shear forces generated by rigorous shaking are sufficient to convert your cream into butter.

1. Fill the jar about ¾ of the way to the top with the heavy whipping cream and close the lid. 2. Shake the jar for about 4-5 minutes until the cream begins to thicken. Shake longer if you wish for a thicker consistency.

3. Drain off the buttermilk and place butter in a small bowl. Knead the butter under cold running water to remove any remaining buttermilk. 4. Salt to taste. Form butter into a ball or log. Serve immediately or refrigerate.

Vince C Reyes earned his Ph.D. in Civil Engineering at UCLA. Vince loves to explore the deliciousness of all things edible. Read more by Vince Reyes