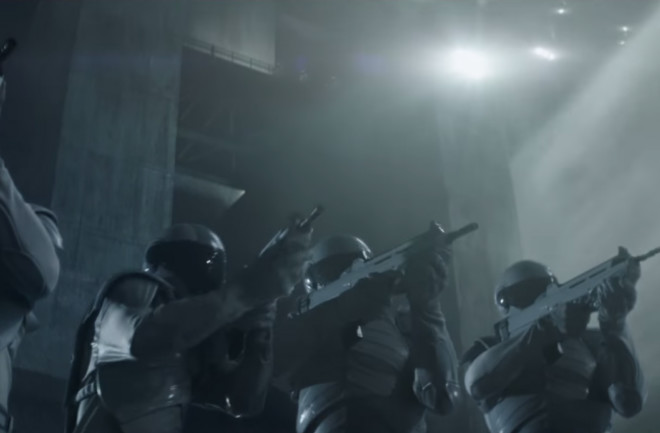 Peacekeeper soldiers using the FS F2000 bullpup assault rifle in "The Hunger Games: Mockingjay - Part 1." Credit: Lionsgate You've probably seen a bullpup gun even if you don't know what it is. Millions of moviegoers have seen the futuristic-looking guns appear in the hands of Peacekeepers, the militarized law enforcers of the dystopian Capitol government in "The Hunger Games" films. The unusual shapes of bullpup guns have also featured in many past science fiction flicks such as the "Terminator" films, "Total Recall," "Stargate" and the "Robocop" series. But their unique designs aren't restricted to the silver screen. Many modern militaries have embraced bullpup guns as the ideal weapons for doing battle within the crowded streets and buildings of cities — scenes that could just as easily be ripped from Hollywood's more feverish dystopian nightmares. The eye-grabbing quality of bullpup guns comes from how they overturn the past 500 years of firearm design. Traditionally, most gun designs have placed the trigger behind the gun's magazine and action. The magazine stores cartridges — units of ammunition that include the bullet, powder and primer — while the gun's action mechanism loads, fires and ejects cartridges. A conventional design that placed the gun's action farther away from the user's face made sense early on in the history of guns, especially when imperfect gun designs or materials risked the weapons exploding. By comparison, bullpup guns place the trigger in front of the magazine and action. That means the magazine and action can fill the space normally taken up by the gun stock, which allows for a shorter weapon overall. But military, law enforcement and civilian gun users still remain divided over whether the bullpup design represents an improvement over conventional gun designs. "This argument between bullpups and standard guns has been around for 60 years," says Richard Stone, an associate professor of industrial and manufacturing systems engineering at Iowa State University.

A Ruger 10/22 Conventional (top) compared with a Ruger 10/22 Bullpup (bottom). Credit: Richard Stone Bullpup designs first appeared at the beginning of the 20th century, but only really took off in the 1970s and 1980s with the first modern bullpup assault rifles such as the Austrian-made Steyr AUG. Despite some initial problems, the shorter design of bullpup guns makes them easier to use in close-quarters urban combat or while firing from inside cramped vehicles — battle conditions that have become increasingly relevant in the modern world. Bullpup guns have become standard use among the militaries of certain European countries, Israel, China and Australia, among others, but the U.S. military and U.S. civilian market have largely avoided bullpup guns. Fierce debates have raged in online forums devoted to guns about whether the bullpup or standard gun designs have the edge in various shooting scenarios. Stone first encountered this debate while working with a group of former and current U.S. military and law enforcement personnel. The gun experts had begun arguing the finer points of what made for the best assault rifle. Most of them favored the conventional wisdom that viewed bullpup guns as being less accurate and potentially being slower to reload. But Stone wasn't so sure. He doesn't consider himself a "gun guy," but from a physics and ergonomics standpoint, he thought that the bullpup guns should have the edge in accuracy and stability. So he and his fellow researchers enlisted a group of 48 people to compare bullpup and conventional guns in live-fire exercises at the local sheriff's gun range in rural Iowa.

Duel of the Guns

The study had two showdowns between conventional and bullpup guns. First, the conventional Smith & Wesson M&P15T (a variant of the M4 rifle) was pitted against a FN Herstal FS2000 (which coincidentally appears in "The Hunger Games" films). Second, a conventional Ruger 10/22 rifle went up agains the bullpup configuration of the Ruger 10/22 rifle. Participants tested each of the guns in a "Vice President" combat drill that required them to fire 12 shots into three targets at a distance of 25 yards. Such a distance is roughly similar to the standard scenario for law enforcement officers engaged in firefights with "active shooter" suspects.

An M&P15T Conventional gun (top) alongside an FN FS2000 Bullpup gun (bottom). Credit: Richard Stone Researchers did more than just look at the final accuracy of the participants. They also measured the stability of the gun users by having them stand on a "force plate." They also attached accelerometers to the ends of the guns in order to track the sway of the gun barrels — a jerking movement accompanying each gunshot that means gun users must bring their gun barrel back on target for the next shot. Acoustic sensors captured the exact moment of each cartridge's propellant charge going off and firing each bullet. In the end, the bullpup guns showed a small but significant boost in accuracy compared to the conventional guns. Similarly, the biomechanical tracking of user stability found that the bullpup guns offered better stability for their users. Reload times and overall time to complete the drills were not significantly different from a statistical standpoint. (Additional details can be found in the paper published in the journal Human Factors.) Such results favoring the bullpup guns in this particular case went against the expectations of the study's participants. All of the participants had at least some prior firearms training from military or law enforcement, but some also represented more expert gun users as former or current members of the U.S. military or law enforcement agencies. ("The Marines were the best shots, amazing shots," Stone says.) A post-study questionnaire showed that a majority of those participants favored the conventional guns in terms of comfort level — not surprising given how few U.S. military and civilian gun users have used bullpup guns. In fact, most believed they had performed better with the conventional guns before they saw the results. If anything, the U.S. comfort level and familiarity with conventional guns should have biased the results in favor of the conventional gun performance. Stone's study results may encourage some Americans to reexamine their cultural preferences and take a second look at bullpup guns. "Most of the people were surprised they could shoot better with the bullpup guns," Stone explains.

Regardless of any U.S. misgivings about bullpup guns, the exotic look of such weapons has drawn the eyes of many Hollywood filmmakers looking to give their science fiction stories a futuristic flair. The Austrian Steyr AUG has appeared in films such as "Robocop," "The Running Man" and "Predator 2," and was modified to look even more alien-like in "The Fifth Element." The Muzzelite MZ14 Bullpup Stock that converts conventional guns — the Ruger Mini-14 carbine and Ruger 10/22 rifle — into bullpup guns became a popular starting point for Hollywood to make its own futuristic-looking weapons in films such as "Starship Troopers," "Total Recall" and "Terminator 2." A prototype South African bullpup assault rifle, called the Vektor CR-21, appeared in the science fiction film "District 9." The second and third films of popular "The Hunger Games" series prominently feature bullpup guns such as the FN P90 submachine gun and the FN F2000 Tactical bullpup assault rifle. Such weapons appear mainly in the hands of the Peacekeeper troops attempting to suppress a growing rebellion in the districts of the fictional country Panem in a dystopian North America. Given the all-out military conflict awaiting moviegoers in the fourth and final "Hunger Games" film coming out in 2015 it's likely that bullpup guns will have an even bigger presence in the finale compared to their current appearances in "The Hunger Games: Catching Fire" and "The Hunger Games: Mockingjay - Part 1." Likewise, bullpup guns have appeared in a wide variety of science fiction TV shows such as "The X-Files", "Star Trek: Voyager" and "Firefly." Fans of military-themed video games may also be familiar with bullpup guns through games such as "Counter-Strike," the "Battlefield" series and the "Call of Duty" franchise. Many of Stone's students told him of becoming acquainted with bullpup guns through their gaming hobbies.

Aiming for the Future

In the real world, militaries and law enforcement agencies make their gun-buying decisions on many factors that go beyond just accuracy and ease of use. But Stone see this recent study as a solid first step toward understanding the differences between bullpup guns and conventional guns. He pointed to plenty of issues that future studies could tackle. For instance, how do the different gun designs affect shotguns or sniper rifles firing heavier rounds with more propellant charge? How do the differences play out at distances beyond just 25 yards? How would complete gun novices perform with bullpup guns versus conventional guns? How does the shorter barrel length of many bullpup guns affect aim when using iron sights? Stone also noted that academic research in the field of human factors — a focus on the interaction between technological design and human user experience — has tended to ignore guns. Part of the reason may be the difficulties of safely conducting live-fire studies. Another reason could be the highly politicized debate over how both U.S. law enforcement and civilians use guns. But Stone hopes that his study provides some knowledge to help law enforcement agencies decide on what's the right weapon to help officers or agents take down serious threats while minimizing the potential for hitting innocent bystanders. "If we ignore things such as guns, we end up with more dangerous tools," Stone says. "This is purely to demystify them."