High-tech Melanin Might Help Put Technology Inside Our Bodies 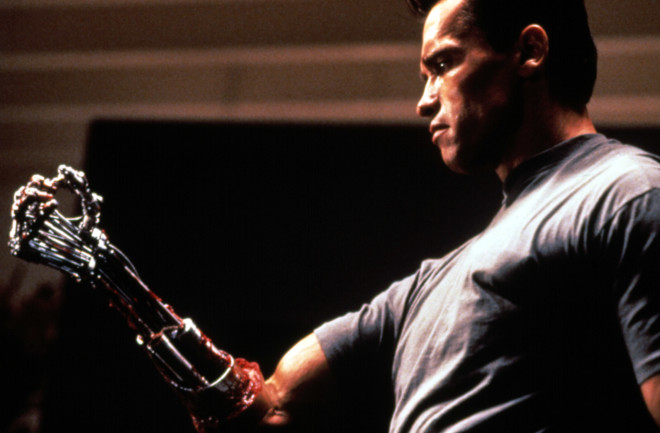 A form of melanin could help integrate technology into our bodies, though actual robot arms might be a stretch. (Credit: Everett Collection) We have a complicated relationship with melanin, the natural chemical pigment that gives color to our eyes, hair and skin. It protects our skin from harmful radiation from the sun, but can also lead to cancer. There’s also the whole matter of discrimination based on differences in physical appearance caused by melanin, which we as a species are apparently still working on. Scientifically, things are no different. A type of melanin known as eumelanin is electrically conductive, meaning it could be a great material for biotechnology, since our bodies are already familiar with the stuff and it’s a biodegradable substance. But, this kind of melanin is unfortunately not quite conductive enough to be useful right now — electricity just doesn’t flow as well across it as we need it to. Scientists had been working on solutions, like mixing melanin with other substances or transforming it into different chemicals, with limited success. Then, a team of Italian scientists had an even better idea: What about just modifying melanin, by itself, to make it more conductive?

Their research, which appears today in the journal Frontiers in Chemistry, shows how they did just that. It’s based on a process called annealing, which basically heats materials to strengthen them. Usually used on metals and glass, the treatment effectively organizes the melanin’s molecules into a more efficient arrangement, without altering their makeup or structure. The team placed films of synthetic eumelanin in vacuum conditions (very low air pressure), and heated them up for a few hours at a time, never exceeding 600 degrees Celsius, where chemical changes (i.e., actually burning or cooking the melanin) would start to take place. The process produced a new material the team calls “high vacuum annealed eumelanin,” (HVAE), which was darker and flatter than the original film. Oh, and it was more electrically conductive, too — a lot more. The new version of eumelanin was more electrically conductive by a factor of one billion, says co-author Carla Minarini in an email.

While it’s still not in the same realm as most metals, this increased conductivity makes melanin an actually useful material for modern biotechnology applications, such as sensors, bio-interfaces and other devices implanted in our bodies. The team even found that HVAE's electrical conductivity depended on the temperature they heated it to, meaning that they could control the annealing process to customize the material “for a wide range of applications in organic electronics and bioelectronics,” they say in the paper. Minarini was even more specific, saying that the new type of melanin might be used to create devices to help treat Parkinson's with deep brain stimulation, human-computer interfaces to control artificial limbs, sensors to study cell and tissue behavior or even electrodes integrated into intelligent fabrics to help monitor and control health. The future of biotech might be more colorful — in more ways than one — than we expected.