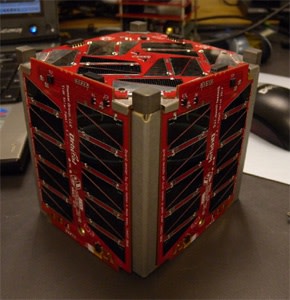 Yesterday a team of high school students put science fairs the world over to shame. Thanks to the work of 50 students over the course of 7 years, a pint-sized satellite set sail yesterday aboard a Minotaur 1 rocket, headed for Earth orbit. They call the cube TJ^3Sat (so named for Thomas Jefferson High School for Science and Technology where the students study). It is the size of a Rubik's cube and can be controlled with a smartphone. The pint-sized satellite has now entered orbit, and you can see where it is at any time via the project's real-time satellite tracking. Like most satellites, TJ^3Sat will send and receive data. In this case, that data will come from public submissions to the project's website. Give it a shot by suggesting a text. Those texts that get approved will be beamed up to the satellite, converted to audio, and then broadcast back to Earth via radio waves. The current student leader explains on the project's website,

"I can say 'Go Colonials' on our ground station and when it is on the other side of the world, in India, someone can tune to that frequency and hear 'Go Colonials.'"

The project is an impressive feat for teenagers, and demonstrates the democratization of once far-out technologies. Jefferson High's satellite was only one of 28 aboard the rocket. As described in Gizmodo,

It's a clear indication that we're entering a new era of fast, cheap, and hopefully-not-out-of-control satellite technology, where even the average citizen can conduct experiments in space.

Get in on it early by renting your own satellite. They even offer weekly rates. Image credit: Thomas Jefferson High School for Science and Technology