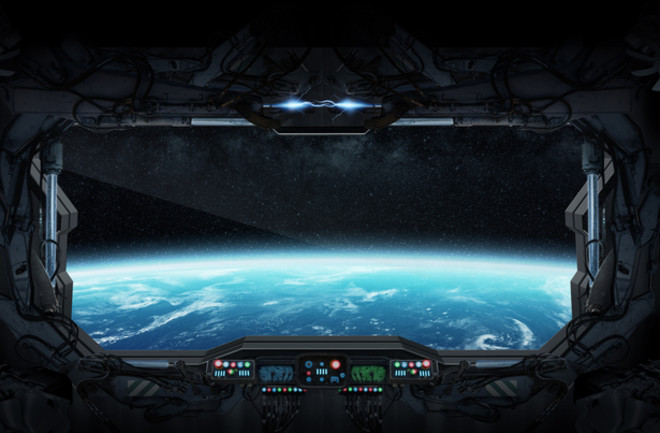 Imagine you are an ordinary interstellar starship commander. You set off on a trip to a nearby star, accelerating to a significant percentage of the speed of light. You know that after a certain period of time you must slow down. But before you start the maneuver, you check your speed and position. A quick look out of the window should confirm everything.

That’s when the problems begin. The pattern of stars outside is nothing like the one where you started so you can no longer use the familiar constellations to help you orient and navigate. It turns out that navigating is much harder for starship commanders than you imagined.

In the future, however, you and your colleagues will be able to turn to the work of Coryn Bailer-Jones at the Max Planck Institute for Astronomy in Germany who has developed a way to determine the position and velocity of a spacecraft traveling through our neighborhood. His approach can pinpoint position to within about 500 million kilometers, just a few times the distance from the Earth to the Sun.

Bailer-Jones' approach is straightforward. He has assembled a three-dimensional map of nearby stars and the way they are moving in our neighborhood. Then from any point in this region, it should be possible to determine your position by measuring the angle between three pairs of stars.

It is also possible to work out your velocity by measuring a property of each star called its aberration. This is a kind of optical illusion that shifts the position of a star for observers who are moving relative to it.

Astronomers have studied the aberration of stars for centuries. The phenomenon was discovered because the Earth’s motion around the Sun causes this apparent shift. So the aberration of many stars relative to the Solar System is well known.

Of course, the effect of aberration for a spacecraft somewhere else in the galaxy is entirely different. But it can be determined by measuring any change in the angle between stars. “If we measure the positions of many stars — by which we mean the angular distances between many stars — then we can expect to untangle the effects of parallax and aberration to determine the 3D position and 3D velocity of our spacecraft,” says Bailer-Jones.

This approach has seemed obvious for a while but Bailer-Jones has taken it a step further. “Although the concept of interstellar navigation with a star catalog is not new, this is the first time, to the best of my knowledge, that it has been presented in detail and tested via simulations,” he says.

In the past, this kind of work was not possible. That’s because accurate position and velocity measurements for most stars have only recently become available thanks to space observatories such as Gaia. Since 2013, this European Space Agency mission has been measuring the position and motion of some 1 billion stars and other bodies. The result is a 3D star map of our local neighborhood of unprecedented accuracy.

He created a catalog of the position and velocities of the 100 brightest stars nearby. Then placed a spacecraft at a random position within this map and allowed it to measure the angle between ten of the stars it could see with the same accuracy that today’s star trackers manage. The measurements were then crunched to determine the spacecraft’s position and velocity in three dimensions. Finally, he then repeated this process for 100 different random spacecraft positions and also varied the number of stars measured.

The system works well. The results become more accurate as the spacecraft increases the number of stars it measures. With measurements of 100 stars, it is possible to locate the spacecraft to within 150 million kilometers and to know its velocity within 0.6 kilometers per second.

That kind of ability will come in handy for the first starship commanders, in truth likely to be AI systems controlling spacecraft the size of postage stamps. But useful, nonetheless.

Of course, astronomers have investigated other ways to determine position in interstellar space. One is to use pulsars as beacons to triangulate position, much as GPS devices use the signals from orbiting satellites to navigate. The accuracy of this approach depends on how well the period and direction of the pulsars can be measured in advance.

Back in 2016, a UK team showed that this technique could locate a spacecraft to within a few kilometers if it was relatively close to the Sun. However, the accuracy is less certain at lightyear distances.

There is also straightforward dead reckoning and inertial navigation. If you start with an accurate measurement of your speed and direction, then the time of flight determines where you end up. Simple as that! Inertial systems can also account for twists and turns.

This approach can be remarkably accurate on Earth. But various biases and errors can slip into the calculations over time. Whether a spaceship commander would want to rely on this approach over interstellar distances is unlikely.

Which leaves Bailer-Jones’ approach. Star maps like those from Gaia and other similar missions are likely to become more accurate and detailed. So it is quite possible that when the first interstellar starships set off from Earth towards Proxima Centauri or other local destinations, some version of this approach will be at the helm.