Hey, There’s Algae in My Oil! 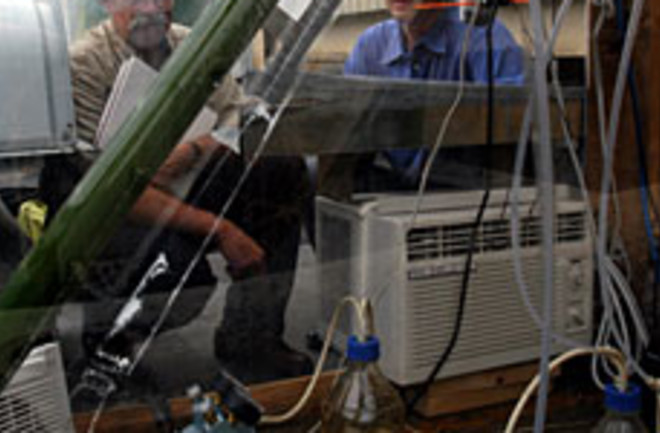 Oil hit $97 a barrel today, but mostly insiders have made a big deal about the upward trends in price per barrel of late. Sure, when it hits $100, a headline or two will appear, buried under the war in Iraq, Hillary’s march on Washington, and some holiday recipes, but pricey crude is out of most people’s minds.

Why is the public not panicking about the high oil prices? For one, it’s not hitting where it hurts nearly as hard as it could, with prices at the pump at an uncomfortable, but internationally cheap U.S. average of $3.06 this week. For another, we’ve been hearing about the rise of oil prices from everyone for years—a daily dose from CNN, The Wall Street Journal and even straight shooting from out of President Bush’s mouth—all saying that oil isn’t going to get cheaper.

But it doesn’t seem like this a problem of boy cries wolf, public stops listening, boy gets eaten by wolf. Plenty of companies have been sinking good money into alternative oil schemes, looking to replace our fine crude with corn-based ethanol (a favorite among politicians); grease from fast-food joints (a favorite among garage enthusiasts); switch grass, willows, and fungus (a favorite among niche researchers); liquid coal (nobody’s favorite); and better batteries (everybody’s favorite), just to name a few.

One that has stayed pretty far off the radar is oil from algae. But if oil heavyweight Chevron has anything to do with it, algae will be on everybody’s mind as an oil alternative soon enough.

Chevron, who expects to drop $2.5 billion in alternative energy from 2007 to 2009, is partnering with the U.S. Department of Energy’s (DOE) National Renewable Energy Laboratory (NREL) to research ways of putting algae-oil in your gas tank. Algae is everywhere, grows quite easily, and its energy return (how much energy you get out over how much you put in to grow and harvest it) could dwarf that of corn-based ethanol (for which you get about 1.5 units of energy for every 1 put in), although it won’t quite stand up to extracting crude oil (where it can be as high as 200 to 1).

This isn’t the first time that the DOE has taken a look at algae. In 1996, the DOE released a Biodiesel to Algae study that came up with such forward looking analyses as: “estimates showed that algal biodiesel cost would range from $1.40 to $4.40 per gallon based on current and long-term projections for the performance of the technology. Even with assumptions of $50 per ton of CO2 as a carbon credit, the cost of [this] biodiesel never competes with the projected cost of petroleum diesel.”

With prices at the pump at $1.16 in January of 1996*, this might have made sense (but, really, how long did they think prices would remain there?). Now, thanks to $100 barrels and $3.00-plus pump prices, the times, they are a changing. And the algae, it will continue to grow.