Hey Baby, Wanna Come Over and Try My New iPad? 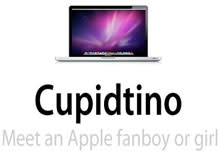 If the mere mention of an iPad sets your pulse raising and your heart thumping, if there's nothing you like better than gliding your fingers over the sleek screen of an iPhone, then you should know that there will soon be an online dating site just for people like you. A new site called Cupidtino promises to help Apple fans find each other, and find happy geek love.

The site will launch in June, but rabid Apple fans can sign up now to be included in the beta version, and can follow Cupidtino on Twitter.

Why start a dating site for such a narrow slice of humanity? According to the site:

Diehard Mac & Apple fans often have a lot in common – personalities, creative professions, a similar sense of style and aesthetics, taste, and of course a love for technology. We believe these are enough reasons for two people to meet and fall in love.

To mark this fine occasion, Flavorwire brainstormed some pickup lines that might work on a Cupidtino participant. A couple of our favorites:

“Is your daddy Steve Jobs? ‘Cause your case is lookin’ finer than a new MacBook Pro’s.”

“Baby, I’m all the AppleCare you’ll ever need.”

Discoblog: Will The iPad Blend? Watch and Find Out.

Discoblog: Is Apple Taking Sexy Back? Raunchy Apps Vanish From the App Store