Here's What the Data on Your Hard Drive Looks Like 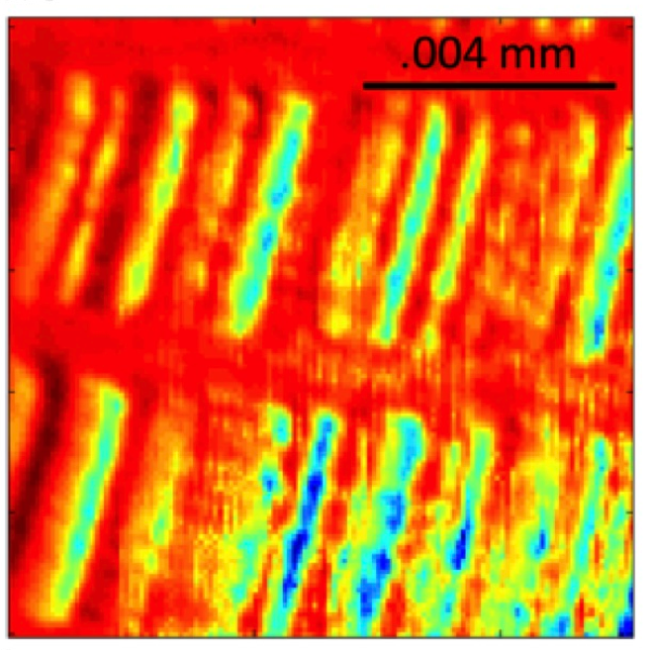 Although magnetism is invisible to our eyes, it powers much of daily life. It drives the electric motors of just about anything that spins: fans, power tools, and blenders. It powers the microphones and speakers in our various gadgets. And it’s crucial for storing information – by which we don’t just mean pinning notes to the fridge. Magnetism enables you to click “save,” power down your computer, and walk away with the peace of mind that your documents, photos, and music will still be there tomorrow. How so? Your computer’s hard drive contains a magnetic disc with billions of tiny magnetic regions, known as bits. These encode all of your digital files into a binary code: a string of 1s and 0s. But unlike looking under the hood of a car to see the engine, opening up your computer’s hard drive doesn’t give you much sense of how it works. Unless of course you could see magnetism.

What if I told you that I built an apparatus that does just that? I refer to it as a microscope, simply because it takes images of very tiny objects. It is not, however, a microscope in the often-used sense of the word: I don’t look through a set of lenses to focus on the object of interest. Rather I measure the magnetic forces between the sample I am studying and a small magnetic lever. The lever is like a really small diving board. Really small. Imagine a diving board as long as a human hair is wide. That’s just about right. 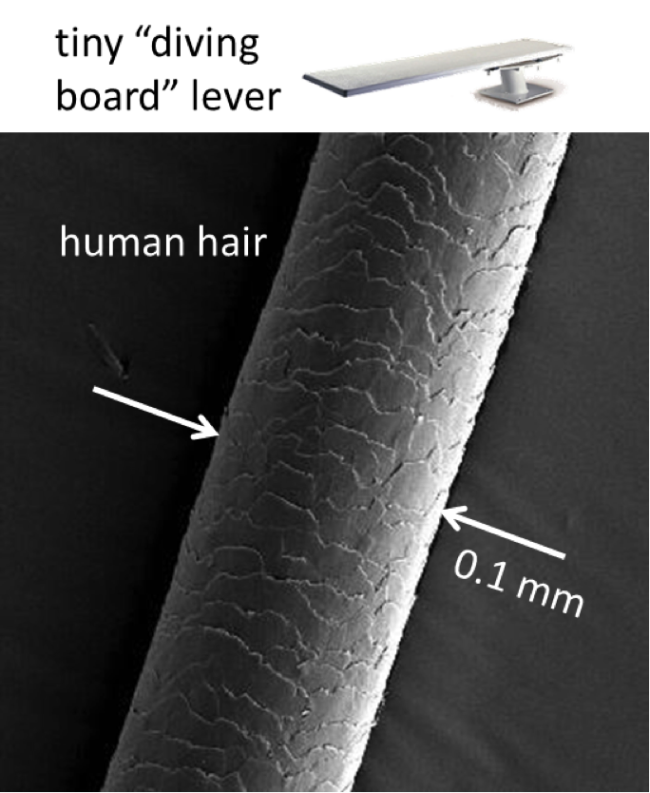 Just as a diving board bends due to the force of a diver’s weight, this lever will bend when it experiences a force. For example, by placing a tiny magnet on the end of the lever, I can detect magnetic forces from a nearby sample. Since opposite poles attract and like poles repel, the lever can sense if the sample is magnetic simply by bending. Because it’s so tiny, the lever can sense very small forces. How small? Consider the mass of a feather – about 1 gram. Imagine it resting on your hand. Not much force certainly, but still perceptible: you can feel some small amount of pressure on your fingertips. This tiny lever can detect forces one trillion times smaller than that. If I were to rest a single red blood cell on the end of this lever, the bending would still be dramatic.

Why is the ability to measure magnetic forces useful? Well, sometimes, seeing is believing. And since you can’t see magnetism with your eyes directly, you need another way to sense it. Which brings me to the hard drive image. In this image, you are looking at two rows of bits, which might be encoding a very small fraction of a document, song, or photo. The alternating red and blue stripes are the digital 1s and 0s. The colors represent the forces experienced by the lever: 0s attract the lever (blue), while 1s repel it (dark red). The cartoon shows the lever hovering above a hard drive sample, deflected by the magnetic bits.

Depending on what kind of file is represented by these bits, it might represent about 6 letters of text, 6 pixels of a photo, or 0.0002 seconds of a song. Remember how I said that your hard drive contains billions of tiny magnetic regions? Well, to squeeze all those bits inside your computer, they have to be incredibly small. In fact, about 10 of these images could fit across the width of a human hair. “Snapping” this image was an “aha” moment for me – I could clearly see how a hard drive stores information. But this kind of microscope can do more than look at today’s technologies. It can help us study new materials, testing them for magnetism. As tech devices are relentlessly miniaturized, it gets increasingly difficult to manipulate and predict material properties. What happens when one of these magnetic bits shrinks to the size of a single atom? Is it still magnetic? Microscopes like this one are powerful tools for finding the answers to questions like this. While our five senses are impressive, they are much too coarse to capture the finest-grained details of our world. There is an entire other universe down at the microscopic level, one that often goes unnoticed or taken for granted. And it is just as marvelous.