A dextrous new robot provides a kinder, gentler way to tinker with your ticker. 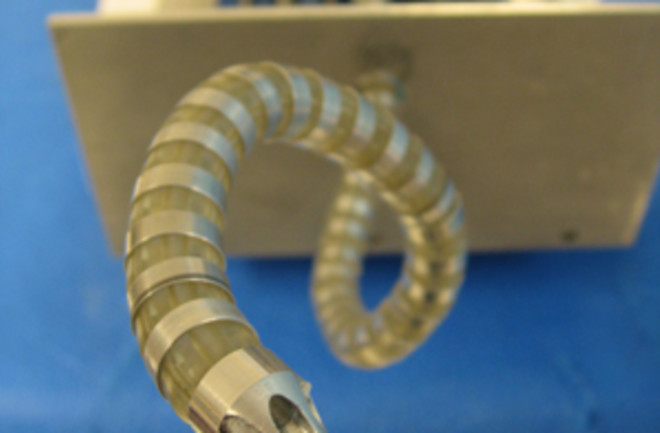 Inspired by the snake’s streamlined body and flexible spine, engineers are building robots that can slither into places too tight or dangerous for people to enter. Such devices have shown some promise for search-and-rescue operations, but Howie Choset, a roboticist at Carnegie Mellon University, is taking them to a more intimate location: straight to the human heart.

Choset is one of the inventors of Cardio Arm, a foot-long serpentine robot designed to assist in cardiac surgery. The device worms its way into a patient’s chest through a three-quarter-inch incision in the solar plexus. A surgeon controls movement of the robot’s head with a joystick, and the rest of its 102 joints snake along behind. A tiny, front-mounted camera lets the operator see where the Cardio Arm is going and make course corrections.

The Cardio Arm was used on a human for the first time in February, when doctors in the Czech Republic employed it to perform a diagnostic heart-mapping procedure. The robot made the operation far less traumatic than it would have been otherwise. “Instead of cracking open a person’s chest,” Choset says, “we can do a surgery and send patients home the next day.” He hopes to test the device in other surgeries, such as ablation—which involves burning away a small amount of heart muscle to correct an abnormal beat—and is already dreaming of new adventures with other snake-bots. “We’re hoping to use a remote-controlled robot to go through small caves in Egypt,” he says, “and find remains of ancient Egyptian tombs.”