The laser in a tiny but powerful microscope is giving neuroscientists their best look yet at how the brains of rats work as they scurry about their daily activities. Until now, the ability of researchers to study the animals’ brains while they socialize or look for food has been relatively limited. The best method was to hook up a restrained rat to electrodes that monitor brain signals and then play images on a screen in front of the rat to create the illusion that it is roaming through a landscape. But virtual reality can go only so far in simulating natural movement. “To understand how the animal’s brain operates, we need to let it behave as naturally as possible,” says Jason Kerr, a neuroscientist at the Max Planck Institute for Biological Cybernetics.

To that end, Kerr and his team recently developed a 0.2-ounce multi-photon microscope that can track networks of brain cells and individual neurons. Mounted on a rat’s head, the 1.5-inch plastic and titanium instrument allows the animal to move freely and captures in real time how brain cells interact during everyday behaviors. One key to the microscope’s success is its powerful 2-photon laser, which emits pulses that probe up to 300 microns deep into the brain. Before researchers activate the laser, they must inject a fluorescent dye to highlight brain cells. Then the laser bombards the dye with photons, causing it to glow green when a cell is active. A miniature scanner guides the beam across the cells. A plastic optical fiber collects the emitted light, which is converted into an electric signal that appears as an image on a computer screen, allowing scientists to track cells without limiting the rats’ mobility.

Since rats and humans probably share similar decision-making mechanisms, this technology could help us understand how we make choices, Kerr says. 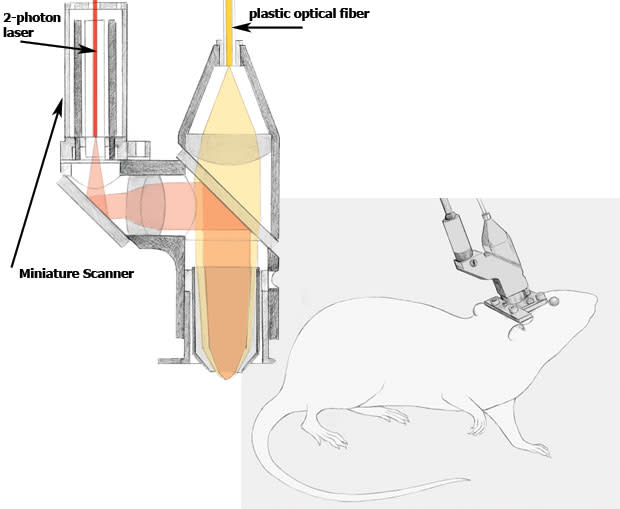