Hawaii Switches to Digital TV to Placate the Birds 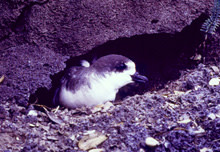 Who knew sharper images and clearer sound would be good for our feathered friends?Come January 15, Hawaii will be the first state in the U.S. to switch over to digital TV, a month before the mandatory nationwide conversion on February 17.But the interesting part about the switch isn’t so much when but why: Federal wildlife officials suggested tearing down the old analog transmission towers earlier to avoid interference with the nesting season of a bird, the endangered Hawaiian petrel.

Petrels, also known as the ’Ua’u, are only found in Hawaii, and more than 1,000 of them nest on the slopes of Maui’s Haleakala volcano, where the analog towers are currently located.The nocturnal species, which reportedly has a chirp that sounds like a yapping puppy, is not adapting well to urban sprawl: The birds are disoriented by city lights and sometimes get caught on wires.Officials think rebuilding the towers at a different location, away from the petrel’s nesting sites, will give them some peace to nest, and help the species’ survival in the long term.

An estimated 17,000 Hawaiian households (current antenna users) will be affected by the switch.Each household will receive a $40 government subsidy to pay for the new digital TV converter boxes. So they can at least have the TV on to drown out all those yapping birds.