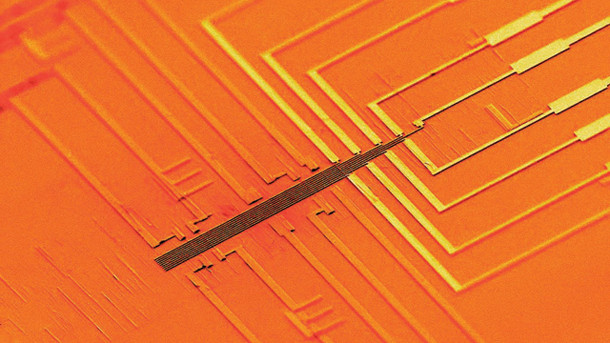 Today in the journal Nature, researchers led by Charles Lieber report a big step forward in the field of tiny computing: the creation of linked-up logic circuits made of nanowires, which could be used to build itty-bitty processors.

The devices described in the paper layer additional wires across the germanium-silicon ones; charges can be trapped in these wires, influencing the behavior of the underlying nanowires. This charge trapping is nonvolatile but reversible; in other words, you can switch one of the nanowires on or off by altering the charge stored in its neighborhood. This makes it possible to turn the nanowires into a standard field-effect transistor (the authors term them NWFETs for "nanowire field-effect transistors"). [Ars Technica]

Lieber had been able to create simple versions of those NWFETs before, but those were difficult to build on a large enough scale to create logic circuits.

Lieber’s team reports in this week’s Nature that they’ve been able to build a programmable array of nanowires that can have up to eight distinct logic gates. They dub such an array a "logic tile," with the idea that multiple tiles could be connected to perform more-complex logic functions. [IEEE Spectrum]

Though Lieber's achievement is impressive, he concedes that it's difficult to imagine his tech competing with the incredible pace at which computer processing speed accelerates. But, he says, he doesn't have to: Nanoscale

processors have qualities that could make them more suitable than traditional ones for the very small devices that are on the leading edge of research.

"The key thing is to recognize that we're not trying to compete directly with high-performance silicon electronics," he says. Projections show that the new wires could be up to 100 times more energy efficient than conventional technologies. That could make the meshes useful as logic circuits in low-power applications such as small robots, or perhaps biomedical devices. [Nature]

80beats: A Nano-Wiretap: Scientists Use Nanowires to Spy on a Cell’s Inner Life