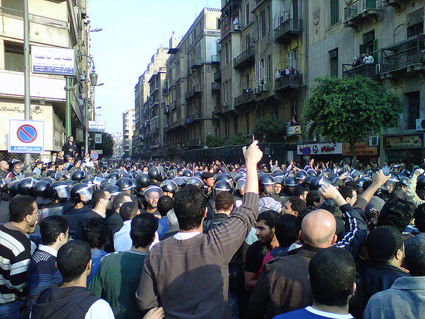 When last we covered the hacking group Anonymous, its members were trying to bring down the websites of companies like PayPal and Mastercard that had withdrawn support from WikiLeaks under government pressure. Now hackers have a new political target: Groups like Anonymous are launching attacks to bring down government websites in Egypt and Yemen as a show of solidarity with the protesters there.

The website of President Ali Abdullah Saleh has become inaccessible as Yemenis stage anti-government protests. It follows attacks on the websites of Egypt's ruling party and ministry of information this week. Last month Anonymous shut down some Tunisian websites, including the government's official site. [BBC News]

Anonymous managed to bring down the Ministry of Information site in Egypt, as well as that of President Hosni Mubarak

’s National Democratic Party. As was the case during the war over WikiLeaks, Anonymous hackers' primary weapon has been distributed denial of service attacks.

DDoS attacks work by flooding a website with billions of bogus requests for information, tying up its servers so that regular visitors cannot reach it. While they rarely cause permanent damage, DDoS attacks can cost online businesses millions of dollars in lost revenue. [MSNBC]

But, of course, DDoS attacks are illegal, and governments in the West are trying to catch up to hackers who participated in the WikiLeaks offensive.

The F.B.I. said last week that it had executed 40 search warrants “throughout the United States” in connection with that campaign. The strikes by Anonymous ... could lead to criminal charges that carry 10-year prison sentences, the F.B.I. said. Arrests have been made and equipment seized in Britain, the Netherlands, Sweden, Germany and France, according to British and American officials. [The New York Times]

that, "We’re sick of oppressive governments encroaching on people,” and that Egyptians with newly restored Internet access

are organizing, too. Meanwhile on the streets, protests in Egypt continue, and the pressure mounts on Mubarak

to resign immediately. Related Content: 80beats: The Hacker War Over WikiLeaks Rages On

80beats: Welcome Back, Egypt: The Country's Internet is Back Online

80beats: After Looting in the Egyptian Museum, Archaeologists Pick up the Pieces