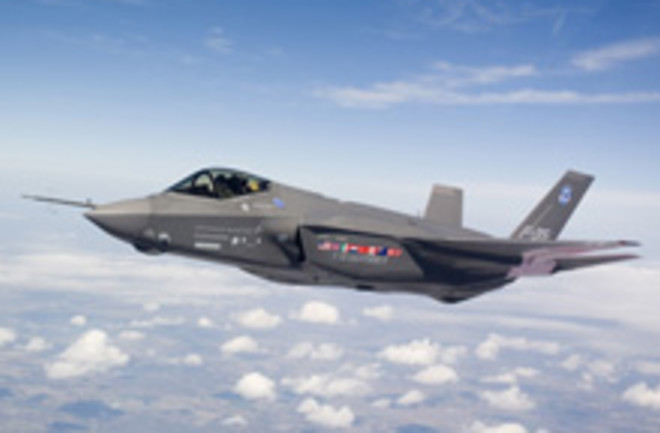 Cyber spies have hacked into computers containing information about the U.S. Defense Department's most expensive weapons program ever: the $300 billion Joint Strike Fighter, a fighter jet also known as F35 Lightning II. The

intruders were able to copy and siphon off several terabytes of data related to design and electronics systems, officials say, potentially making it easier to defend against the craft. The latest intrusions provide new evidence that a battle is heating up between the U.S. and potential adversaries over the data networks that tie the world together [The Wall Street Journal].

U.S. officials reportedly traced the hackers back to China, but experts note that it's extremely difficult to determine the real origin of an online attack, as paths can be disguised and identities masked. Meanwhile, the

Chinese Embassy said in a statement that China "opposes and forbids all forms of cyber crimes." It called the Pentagon's report "a product of the Cold War mentality" and said the allegations of cyber espionage are "intentionally fabricated to fan up China threat sensations" [The Wall Street Journal].

Officials believe the hackers infiltrated the networks of several contractors who were working on the Joint Strike Fighter program. They say it's impossible to know exactly what information the spies absconded with, as they inserted technology that encrypted the data as it was being transmitted. However, the hackers couldn't get to the most sensitive information regarding the fighter jets. Officials say that

the plane's most vital systems -- such as flight controls and sensors -- are physically isolated from the publicly accessible Internet [The Wall Street Journal].

This incident comes on the heels of the revelation two weeks ago that spies have hacked into the U.S. electrical grid

, and left behind software that could allow them to disrupt the flow of electricity around the nation. Officials claimed to have traced those attacks back to China, Russia, and other countries. Related Content: 80beats: Electrical Espionage: Spies Hack Into the U.S. Power Grid

80beats: Is the U.S. Government Losing the Battle Against Hackers?