Hack Yourself! Explore the World of Self-Made Cyborgs 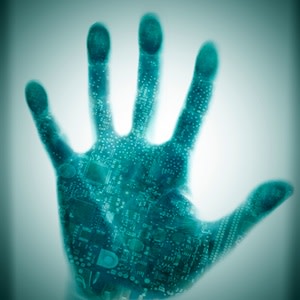 In the future, science fiction predicts, implanted chips and screens will turn humans into cyborgs. But for a growing group of technophiles, the future is now. There’s colorblind “first cyborg” Neil Harbisson

, whose computerized EyeTap glasses are attached to his skull. And then there are the transhumanists

who go under the knife at home or in piercing parlors to implant homemade electronic devices, such as magnets that provide the sixth sense of detecting electromagnetic fields

. Reporter Ben Popper delved into the world of DIY cyborgs

for an article at The Verge, even receiving his own magnetic implant:

On a hot day in mid-July, I went for a walk around Manhattan with Dann Berg, who had a magnet implanted in his pinky three years earlier...Berg took me to an intersection at Broadway and Bleecker. In the middle of the crosswalk, he stopped, and began moving his hand over a metal grate. "You feel that," he asked. "It’s a dome, right here, about a foot off the ground, that just sets my finger off. Somewhere down there, part of the subway system or the power grid is working. We’re touching something other people can’t see, they don’t know it exists. That’s amazing to me." People passing by gave us odd stares as Berg and I stood next to each other in the street, waving our hands around inside an invisible field, like mystics groping blindly for a ghost.

The biohacking movement is developing increasingly sophisticated devices to enhance the human body. And their members range from punk Lepht Anonym

, who operates on herself in her own apartment with improvised surgical tools (sterilized with vodka) and no anesthetic, to professor Kevin Warwick, who had a trained medical team install his cybernetic implants. To peek into their post-human world, read the whole article at The Verge

Image of futuristic hand via Shutterstock