Google's Car Is the Face of Future Robots 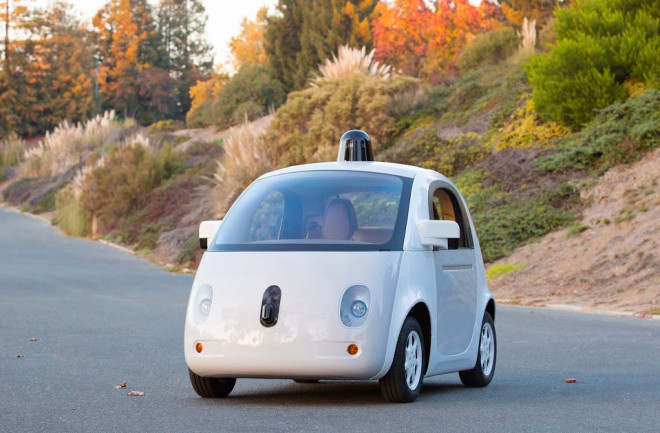 Google's self-driving car prototype has a mild face for a reason. Credit: Google Robots probably won't look human when they first begin appearing on the streets in the next several years. But some robot cars such as Google's self-driving vehicles will have recognizable faces designed to win human hearts and minds. Google hopes to begin testing its custom-made robot cars on the roads of Northern California starting in 2015. Google's self-driving car prototype represents a cuddly vision of the robot future that is almost the complete opposite of what most dystopian science fiction films have imagined. The vehicle's headlights combine with a pert "nose" to give the impression of a wide-eyed baby confronting the world for the first time. Wired has described the car as "an egg with the face of a koala." Cartoonist Matthew Inman, creator of the popular website The Oatmeal, dubbed the Google cars "adorable Skynet Marshmallow Bumper Bots." In other words, Google's car has a face that wordlessly asks people to trust it when they see the driverless vehicle ambling down the road. Trust is important because the idea of self-driving cars can inspire both excitement and fear. One the one hand, many experts have hailed the future of self-driving cars as delivering human drivers from their own distracted, sleepy, drunk driving habits and possibly reducing the number of road accidents — the cause of 32,719 deaths in the U.S. alone in 2013. A report by the Eno Center for Transportation, a nonprofit think tank in Washington, D.C., suggested that a future filled with self-driving cars could also ease traffic congestion and save people time during their commutes. On the other hand, more than 75 percent of people surveyed by insurance.com said they would not trust a self-driving car to take their child to school. And only 31 percent of survey respondents said they would let the car's computer drive whenever possible. Google knows that it has a lot of work to do in getting people to fully trust its vision of self-driving cars that have only a start and stop button. The technology giant has itself become the face of self-driving cars in the public imagination as the company brand most associated with the technology, according to a report by KPMG, an audit, tax and advisory firm. Yet the same report showed that respondents in focus groups ranging from Los Angeles to New Jersey almost all expressed a need to be able to take control of the car at any point — partly because they didn’t fully trust the self-driving technology and partly because some still wanted to enjoy manual driving. Part of Google's "hearts and minds" strategy involves dialing down the aggressive driving in the self-driving car's behavior and restraining its top speed to 25 miles per hour — a pace more suitable for driving in the streets of suburbia rather than tearing down the highway. Inman, creator of The Oatmeal, recounted his driving experience with a prototype of Google's self-driving car: "The car we rode in did not strike me as dangerous. It struck me as cautious. It drove slowly and deliberately, and I got the impression that it’s more likely to annoy other drivers than to harm them." But Google has also clearly put plenty of thought and care into the face its self-driving car presents to the world. That's a wise move, given how the fusiform face area of the human brain seems quite willing to interpret the fronts of cars as faces, according to several studies. One 2012 study published in the journal

used fMRI brain scans to see how car "experts" interpreted the car faces. A recent study published on Dec. 17 in the journal PLOS ONE also used such brain scans to examine connections between a person's tendency to see human attributes in the fronts of cars and the activation of the fusiform face area of the brain. A 2010 study in the journal

has even examined how people of different cultures — specifically Austrian and Ethiopian — interpret the shapes of car fronts as having certain human qualities. The automobile industry has also recognized the face factor in how it presents its cars to customers. A Wall Street Journal article from 2006 explored the various faces of car models and brands, noting the changing tactics among automakers to either make cars look appealingly cute or menacingly angry. Angry car faces held sway among car buyers at the time, but certain automakers stuck with the kindlier car faces in accordance with their brands. Google's idea of going with the cuddly face makes sense for a introducing a potentially terrifying new technology that would come face to face with pedestrians and cyclists on a daily basis. It's not a new tactic for selling cars, but it does represent a new push to make robots a part of people's lives in a way that has never been done before.