Google Taught Me How to Cut My Own Hair

In the Internet era, the most accessible information is the most valuable. 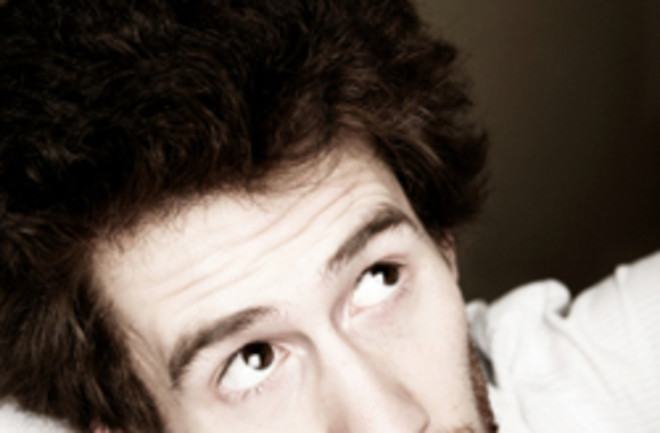 I take three fistfuls of tap water and use them to moisten my ludicrous bulge of hair. I have been alone at this point for nearly a month—writing, or typing at least, in the waterlogged valleys of Wales—and my hair now resembles a sort of lush tumbleweed. As a hairstyle beneath which to lead the Life of the Mind, it is something I almost cannot rate too highly. Sections of it, when twiddled around a finger, have shown some promise as a stimulant to cogitation. And it converts automatically to a pillow during the frequent and sudden naps that litter the workday of the professional thinker. But as a hairstyle to talk to people from beneath—and I have been led to believe that there will be people arriving tomorrow at lunchtime, some of them possibly ladies—it will emphatically not do.

For what it’s worth, there is a barbershop in the nearest town, just a green half hour’s drive away over the hills. But it is not worth much, to be honest, for I have seen what they do to people in that place, and while I think I understand on some level why it is they feel they have to do it—the bleak categories of rural society would very quickly be disordered if people suddenly started looking attractive—that is not the same thing as wanting them to do it to me.

Fortunately though, the year is 2007, and an awesome power that just a decade ago I would have backed away from in holy terror, like a Neanderthal from a high-end propane grill in full flame, I calmly reach out and seize. That science and technology would endow me with godlike abilities was my faithful hope since boyhood. Yet I never dreamed of this, of wielding that one power God himself chooses not to exercise, at least according to visual depictions. Taking a belt of scotch, I meet my gaze in the mirror. And having met my own gaze, I do the once unthinkable: I cut my own hair.

The man who cuts his own hair, most serious civilizations have historically assumed, has a fool for a client. As far back as ancient Rome we find no less a figure than Martial, the father of the epigram, outing a rival as a self-haircutter and taunting him with a nasty Numquid tonsorem, Gargiliane, times? Si pudor est, desine. (Are you frightened of the barber, Gargilianus? If you have any shame, you’ll desist.) Harsh words, but ones that would with hindsight have served ably as the Latin motto of Western Culture. From antiquity through to the modern age, the figure of the self-haircutter has been loathed with a passion that defies easy explanation.

Until now, that is. A world in which after you’d finished cutting your own hair you might as well just go ask your sister out for cocktails, so far had you drifted from the main drag of civilized behavior, has become one in which George Clooney cuts his own hair, as does Catherine Zeta-Jones. How did it happen?

Our answer begins on a beach in communist Romania. The year is 1977, and one Alfred Natrasevschi is showing every outward sign of enjoying a relaxing day on the shores of the Black Sea. However, when Natrasevschi entered the water that day and ducked beneath the waves, he didn’t resurface until nightfall, at which point, using an inflatable raft hidden in his beach toy, he had paddled 12 miles to international waters, and freedom. Thus begins one of the great untold stories of American enterprise. For it was Natrasevschi, years later, who would quit his job at Hewlett-Packard to challenge one of the world’s oldest and most robust taboos. Natrasevschi’s invention was the RoboCut; it and the more notorious Flowbee, the brainchild of a carpenter from San Diego, bestrode the world of late 1980s TV infomercials like the Beatles and the Stones did the world of popular music in the early 1960s. The two devices were roughly similar in design—both sucked hair into a vacuum tube, snipped it with internal blades at a precise and controllable length, then sucked away the clippings—but they were fully indistinguishable in purpose: to put into the hands of the common man a power hitherto known only to trained professionals, that of cutting human hair.

Indeed, the world of coiffure is now entirely changed. More people than ever before are cutting their own hair—not just George Clooney and this correspondent but also Julia Stiles. But it has nothing to do with either the Flowbee or the RoboCut. Because the secret of cutting your own hair, I discovered after typing “how cut own hair” into Google and twiddling my thumbs for 0.08 seconds, is just to cut it, with a pair of scissors. First, you moisten the hair, which makes the individual hairs cohere into manageable strands. Second, using scissors, you snip off all those sections the presence of which were what convinced you that you needed a haircut in the first place.

Google is exceptionally useful for finding out this kind of information. In the last week I’ve also used it to learn how to make pasta out of stinging nettles and to solder new capacitors into a vintage Vox guitar amp, despite not knowing either how to solder or what a capacitor is. Even as a child in the 1970s, I’m sure I could have punted my proto-skateboard to the library and self-tutored on any of the aforementioned topics—but I didn’t. I wouldn’t have dared. By my understanding, the world of appliance repair, cooking with low-grade poisons, or attempting to cut hair was demonstrably the province of experts.

The Internet has now entirely inverted the criteria by which we assign value to information. In the old world, the knowledge most highly prized was the knowledge that was hardest to get. The truly powerful and transformative ideas were assumed to be the ones you learned only from a six-year stint at an Ivy League medical school, or after climbing a Himalaya to consult some sort of nude cross-legged yogi.

These days, it’s the reverse. The ideas we prize the highest are the ones that are easiest to access. If an idea or a tip or a secret of life hasn’t yet found its way to the Internet, we now assume there must be something wrong with it, and most of the time we’re right. Of those ideas that have found their way to the Internet, we trust the ones listed on the first page of our Google search more than the ones on page 11, because their prominence reflects their popularity, and their popularity, we assume, reflects their usefulness.

All of which has made these uncomfortable years for the once-venerated figure of the Expert. We are no longer intimidated by his alleged treasure trove of arcane secrets, the ones he accrued by years of study and herculean sacrifice. So it is, for better or worse, with Science. We still respect our scientists, and still defer to their expertise on matters of theory or about which we have no interest. But we also—all of a sudden—feel entirely free to get involved whenever we feel like it. We’ve seen the upside of this in the sudden growth of private space exploration. There was never any law saying random billionaires couldn’t build their own rockets to the moon; it was just that during the heyday of the Expert, such a feat, like cutting both sides of your hair symmetrically, was assumed to be out of the layman’s reach. And we’ve seen the downside in the explosion of junk and/or populist science over the last 10 years. Anyone who’s ever channel surfed onto Fox News during one of the frequent occasions when a talking head attempts to prove the existence of God by his own amateur debunking of the Big Bang knows exactly what I’m talking about.

Where this will all end up is by no means clear, but I find it hard to be pessimistic. A world in which everyone felt entitled to his own scientific method and his own scientific facts would be a very unhappy world indeed. But I don’t think that human nature could ever allow such unchecked relativism. For Science, like cutting your own hair, is indivisible from its own self-correcting mechanism. When we don’t get it right—as I, now that I look at it, have not gotten it right, not quite—the urge to fix our mistakes becomes overpowering.

As for the Flowbee and the RoboCut, both devices are still available. Although their value has been diminished by the Internet, they may be worth purchasing, if only as relics of the days when to defy the tyrannical figure of the trained barber seemed to require some sort of invention to compensate for his “expertise.” But do take care. While researching this piece, I happened to visit eBay and was arrested by five of the most poignant words in the English language: