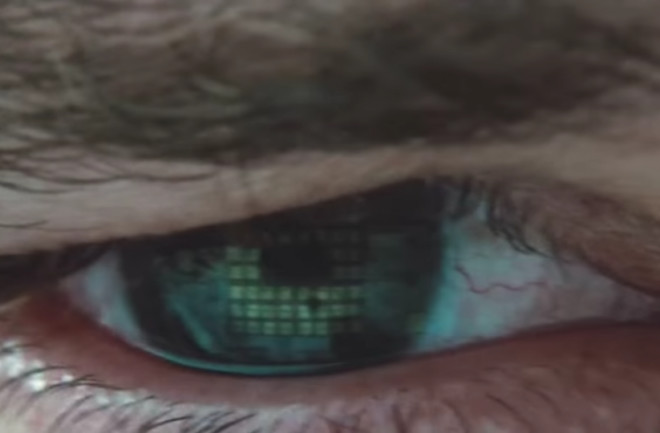 A fictional idea for a smart contact lens in the film "Mission: Impossible - Ghost Protocol." Credit: Paramount Pictures Google has a vision for cyborg eyes that goes well beyond the idea of smart contact lenses. The Alphabet-owned company filed a patent on the idea of replacing the human eye's natural lens with an electronic lens implant. Such a cyborg eye implant could replace normal eyesight functions and correct for eyesight problems. But the concept's existence also hints at future possibilities for putting the capabilities of a smart contact lens directly inside the eye. The Google patent application envisions a laser drilling a hole in the lens capsule that protects the human eye's natural lens, according to research provided by legal technology firm ClientSide. Ultrasonic vibrations would help shatter the eye's natural lens so that the fragments could be suctioned out the hole. That would clear the way for the injection of the electronic lens device and a fluid capable of solidifying into silicone hydrogel. The end result? A new electronic lens that can adjust its shape to provide the appropriate focus for normal eyesight -- or correct for problems such as nearsighted vision without requiring extra contact lenses or glasses. Such a cyborg eye implant could change its shape and adjust the wearer's vision by using technologies such as liquid crystals , micro mirrors, and tiny micro-fluidic pumps. It may also include additional lenses to help fix eyesight problems such as myopia (nearsightedness) or astigmatism. The implant could wirelessly send data to a smartphone, tablet or laptop that has an Internet connection. Such devices could then pass on the data to an optometrist's office or a clinic. In response, an optometrist or another medical expert could potentially send signals with commands to change the programming that controls the electronic lens vision. That might represent the equivalent of a wireless update for corrective lens prescriptions To keep the cyborg eye implant running, Google's patent suggests an energy harvesting antenna that can receive wireless power transmissions from nearby power sources. That means a nearby power source worn as a piece of jewelry or clothing could keep the cyborg eye implant continuously powered. Alternatively, a power source could recharge the battery of the implant while the person is sleeping. The most obvious application of this cyborg eye implant relates to Google's known plans for smart contact lenses. One smart contact lens application would use sensors to measure glucose levels in the tears of people with diabetes. But a previous Google patent application described how a smart contact lens could also allow wearers to read information in barcodes, detect environmental allergens, and monitor the wearer's body temperature or blood-alcohol level, according to Tech Insider. In 2014, a University of Michigan team even described new sensor technology that could provide night vision in a smart contact lens. A patent application never guarantees that a company will actually turn the idea into a product. But this particular patent suggests that Google is certainly keeping the future of smart eye devices and implants in mind. It may also represent another step toward the future of cyborg implants beyond artificial arms and legs -- something more akin to the science fiction visions of the Japanese anime classic "Ghost in the Shell" or the smart contact lenses worn in spy thrillers such as the "Mission: Impossible" films.