Google Goes to the Museum, Takes Anatomy, and Challenges Hackers 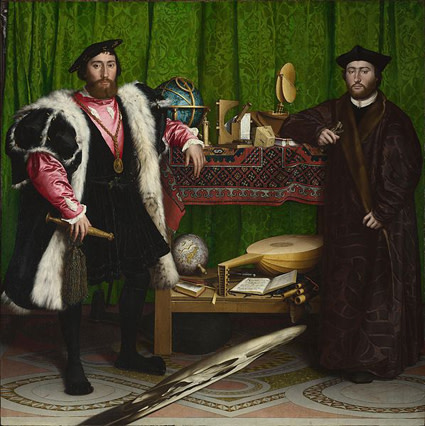 Google extends its tendrils into new arenas so quickly that it's difficult to keep up. This week the giant tech company is creating digital art museums, challenging the hackers of the world, letting you play doctor on your tablet, and messing around with fractals. Google Art Project Going to an art museum: Sure, it's a great way to improve your cultural cachet, but it also makes your feet hurt. Fortunately for couch potato art lovers (or those of us who can't fly all over the world on a whim), Google is bringing some of the world's greatest museums to you through Art Project, which takes Street View technology into the Metropolitan Museum of Art, the Van Gogh Museum, and others.

The level of detail offered up by up to 14 billion pixels is pretty jaw-dropping. Take “The Ambassadors” by Hans Holbein the Younger at the National Gallery in London. It would be easy to ignore the sheet of music that sits on a table in the painting. But with the Google Art Project’s magnification, users can see that the sheet music actually has real music painted onto it. The user can zoom-in and see the individual notes and words with pin-sharp clarity. [Wall Street Journal]

For now just one painting from each of the participating museums is captured in such detail. More could come, and the project's founder is also seeking a way to capture three-dimensional art, like sculpture. A Chrome Challenge For the first time, Google is taking its Chrome browser to Pwn2Own

, a competition in which hackers try to break into the major Internet browsers including Firefox and Internet Explorer. And the company is making things a little more interesting, kicking in an additional $20,000 of prize money into the pool.

The rules for Chrome are slightly different than for the other browsers because it's the only one of the four that uses a "sandbox," an anti-exploit defense. A sandbox isolates system processes, preventing or at least seriously hindering malware from escaping an application -- in this case Chrome -- to wreak havoc on the computer. ... To walk off with Google's $20,000 on Pwn2Own's first day, a researcher must find and exploit two vulnerabilities in Google's code. Only on the second and third days of the contest can researchers employ a non-Chrome bug, say one in Windows, to break out of the sandbox. [Computer World]

Smart investment by Google: If Chrome's defenses are vulnerable, it's better to find out through a friendly competition than a malicious attack. Anatomy on Your Tablet This week saw the roll out of the newest version of Honeycomb, Google's mobile operating system for android devices, along with its app store

. This news doesn't find DISCOVER agog in gadget geekery, but what does is something you can do with it: explore the structure of the human body.

Google Body, which is already available in web form, can now run on Android tablets that use the 3.0 Honeycomb version of Google’s mobile operating system. Using 3D graphics capabilities of the latest tablets such as Motorola’s Xoom, the hardware is now good enough to properly display a 3D-heavy app such as Google Body, which lets you look at your organs, muscles and bones. [VentureBeat]

, we included the magnificent fractal images from Mandelbrot and Julia sets. Now, thanks to Google, you can explore these images

Fractal generators have always been a popular way to push computers to their limits, but modern hardware and software is now powerful enough to render them in-browser. Julia Map relies on the new HTML5 standard in combination with Web Workers, a piece of software that lets web applications take full advantage of the multi-core processors within newer computers. [New Scientist]

DISCOVER: Far Out: The Most Psychedelic Images in Science