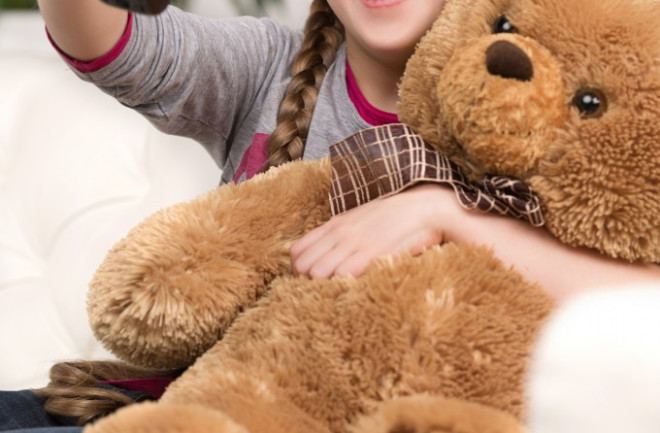 A Google patent filing envisions a teddy robot toy acting as a smart remote control. Credit: BlueSkyImage / Shutterstock Cuddly robot toys such as Furby or AIBO the robot dog have won many human hearts and minds over the past decade. That may be why Google researchers envision the possibility of turning such robot toys into intelligent remote controls for home entertainment systems. But the idea of a teddy bear or doll constantly watching or listening in a home has already stirred some controversy about home privacy. A Google patent application spotted by SmartUp, a legal technology firm, describes how an "anthropomorphic device" with hidden cameras for eyes and microphones for ears could automatically translate simple voice commands into actions that activate smart TVs, DVRs, DVD players and other devices. Instead of manually pushing buttons on remote controls or even a large universal remote control, people could simply tell their robot remote control to stream the latest episode of a favorite TV show through their Blu-ray player or Apple TV. The Google patent — filed in 2012 but published on the U.S. Patent and Trademark Office website on May 21, 2015 — suggests that the anthropomorphic device could simplify the process of accessing TV shows and movies through the growing swarm of home devices and online services. The patent also includes drawing concepts for the lovable robot toy as a teddy bear and a stuffed rabbit. “There are at least some advantages to an anthropomorphic device taking on a familiar, toy-like, or “cute” form..." according to the Google patent application. "Some users, especially young children, might find these forms to be attractive user interfaces. However, individuals of all ages may find interacting with these anthropomorphic devices to be more natural than interacting with traditional types of user interfaces." The device — let's just call it "Teddy" — would work something like this. If Teddy detects a person in the room, it would look at that person so that its camera and microphones are pointed in his or her direction. The Teddy might simply recognize the person visually through its camera. Or it might turn its head in the direction of the person based on the sound of his or her voice. A person could also directly address Teddy by name or by using certain keywords, which would be Teddy's cue to look in his or her direction. Teddy might even use video captured by its camera to read the lips of someone speaking, in case the audio coming in through the microphone is too soft or distorted. The Teddy may not necessarily take the form of a physical toy; Google's patent application also allows for the possibility of a hologram or a virtual avatar that only appears on a screen. But the main function of being able to translate voice commands into actions for coordinating home media devices would remain the same in any case. Google's patent specifically describes the possibility of the Teddy device communicating with an "cloud-based" online server that could handle much of the computer processing. Alternately, the Teddy device might be a more capable robot with its own self-contained computer processing power and data storage.

They See You When They're Sleeping

It's worth keeping in mind that companies file patents all the time which never translate into commercial products. Still, Google's patent idea for a smart Teddy has already led to some alarm. Representatives for watchdog groups expressed worries about a cuddly device capable of constantly monitoring people with cameras and microphones. "The privacy concerns are clear when devices have the capacity to record conversations and log activity," said Emma Carr, director of Big Brother Watch, in a

interview. "When those devices are aimed specifically at children, then for many this will step over the creepy line." Google's patent idea includes a description of how Teddy might still be listening or detecting movement even when it appears to be "asleep." This makes sense if you want to save battery power for Teddy by having a "sleep mode" that still allows it to respond when needed, but it does admittedly come off sounding a bit eerie.

Other possibilities for Teddy include having a "profile" of each resident in a home. That would allow Teddy to tailor its actions and responses to individual residents, but it would need to store representative voice samples or possibly a facial picture so that it could recognize people by their voice or face. A separate Google patent application on robots with multiple personalities tailored to the preferences of individual people — even personalities based on dead celebrities or family members — could also theoretically come into play and allow a Teddy to change its behavior based on the person it's interacting with.

The early concerns swirling around Google's patent idea are similar to those that have arisen around existing smart devices designed for home entertainment. For example, Samsung's Smart TVs have a voice recognition system that allows people to change the channel or volume level with voice commands. Such smart TVs already caused some controversy over fears that they were recording people's living room conversations, which prompted Samsung to post a clarification about the data being stored. Similarly, Microsoft had to assuage privacy concerns over its Xbox One and Kinect accessory that can capture videos, photos, facial expressions and even read heart rates. For the most part, Google's patent idea for Teddy seems to mainly put a personable face on existing home entertainment devices; it's the difference between interacting with a cuddly robot toy and a faceless remote control or device. It also hints at a possible future of homes filled with social robots designed to interact well with humans. Such social robots would likely have many, if not most, of the capabilities found in Google's patent filing. Certain design choices may lead people to see a Teddy device or social robots as behaving in a creepy manner, but they don't necessarily compromise home privacy any more than the Microsoft Kinect or any existing devices that can silently monitor people's behaviors. It's up to companies to have transparent privacy policies that explain what a Teddy or any smart device can or can't do. If companies also clearly allow customers to set privacy levels on devices, that may go a long way toward reassuring fears over the future Teddy sitting on the couch. UPDATE: A previous version of this post mistakenly described SmartUp as a law firm. I've corrected the post to reflect the fact that SmartUp is actually a legal technology firm that has a platform for connecting consumers with attorneys.