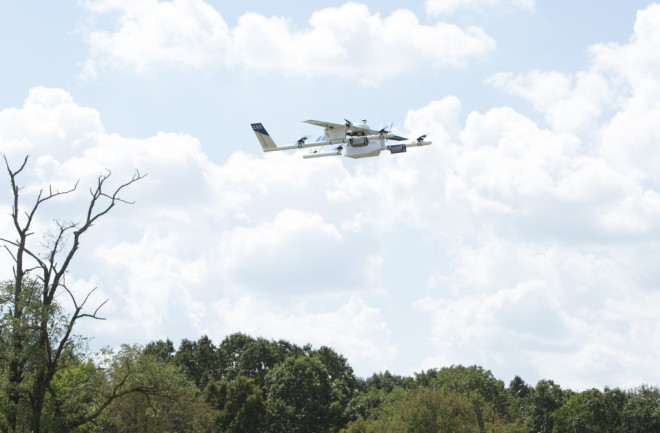 A Project Wing drone belonging to the Google X labs performs a food delivery run at Virginia Tech. Credit: Google Google has been dreaming of hot pizzas and freshly-made coffee descending from the sky to your doorstep. The Google X technologies lab has already begun delivering burritos to Virginia Tech students using its Project Wing drones. But the truly bold part of the Google X plan may be the goal of offering drone food delivery for just a $6 fee. Google's delivery drone vision includes an online website called Wing Marketplace where customers could place orders with retailers and restaurants, according to the

A $6 delivery fee through Wing Marketplace would probably be competitive with the traditional delivery fees and tips for the human workers normally delivering food. The big question is how Google X aims to cover the operational costs of running a drone delivery service by collecting fees of just $6 per order. Tech giants such as Google and Amazon have not been sharing many details on the operational costs of their nascent delivery drone services. But I got some idea of the challenges facing drone food delivery by talking with Charles Walters, a co-founder of Williamsburg Pizza, a local pizzeria chain based in New York City. In my Backchannel story about drone pizza delivery, Walters described how Williamsburg Pizza has experimented with drone pizza delivery by operating a small fleet of custom-made drones and keeping both drone pilots and mechanics on payroll. The operational costs currently don't justify drone pizza delivery as a standard service, but the pizzeria offers a $59 "model aircraft aerial show" for customers who want to pay for the entertainment value. It's a far cry from the idea of a $6 fee for drone delivery. https://www.youtube.com/watch?v=ECm-Kcas4qY Google X and competitors such as Amazon have far more resources to throw at the challenge of making drone food delivery a cost-efficient operation. For example, delivery drones capable of operating autonomously without human intervention could eliminate the need to keep human pilots on payroll. Even a semi-autonomous drone that only requires human control for more complicated operation phases—such landings or lowering the food package to the ground—could reduce the number of human pilots needed. But some basic costs will remain for Google X or any company operating a delivery drone service. Such companies still need to pay the up-front costs of developing or acquiring a delivery drone fleet and then pay the ongoing maintenance and fuel or energy costs. It's unclear at this point that any company has managed to lower the costs of delivery drone operations to make $6-per-order fees for food delivery into a viable business model. A different possibility is that companies such as Google and Amazon may be willing to operate drone food delivery services at cost or even at loss. Even a drone food delivery service that loses money could provide value by attracting more loyal customers to the Google or Amazon brands and broader suite of services.

A Flirtey drone delivers a Domino's Pizza pie to a customer in New Zealand. Credit: Flirtey But Astro Teller, head of Google X, seems to have far more ambitious goals than operating a delivery drone service at a loss. Teller told Erico Guizzo at

that Project Wing's moonshot goal is to make the cost and time for having anything delivered at any time close to zero:

When someone brings you a pair of shoes, a pizza, or whatever, in a six thousand pound car, or a small truck, that doesn’t make any sense if the thing that you ordered is less than 6 pounds, or one 1000th the weight of the delivery vehicle. And it’s clogging up the streets, it’s making sound pollution, it’s making actual carbon footprint pollution. There’s got to be a better way to do these things. So the moonshot is how can we remove a bunch of the remaining friction in how physical things are moved around in the real world. And you know, one of the ways that’s most visceral for people to experience right now is food, because it’s one of the things that we have delivered the most often, but that’s just the tip of the iceberg of how the world would change if whenever you wanted something, it would just magically appear for you.

The delivery drone startup Flirtey has similarly big ambitions, even if it's not promising to bring the cost of delivering anything down to almost zero. The Nevada-based startup wants to become the "Uber" of drone deliveries by being faster to the punch than bigger rivals such as Google and Amazon. Flirtey began delivering Domino's Pizza pies to select customers in New Zealand as of November 2016. It has also conducted U.S. tests—with the approval of the Federal Aviation Administration (FAA)—to deliver 7-Eleven drinks and food to a home in Reno, Nevada. In any case, Google would probably want its Project Wing drones to make as many deliveries as possible per hour to maximize the number of $6 fees collected. Videos of the Chipotle burrito deliveries at Virginia Tech typically show the Project Wing drones not wasting time in landing. Instead, they hover in the air above the drop zone and lower the food package to the ground using a cable. That sort of operational practice could help maximize the amount of time the Project Wing drones spend flying back and forth between deliveries. If Project Wing drones also pick up new deliveries using the same cable method, they might save even more time while avoiding the physical space restraints and operational complications of landing and takeoff. Less wasted time means more time spent delivering food and collecting those $6 fees. https://www.youtube.com/watch?v=VDgGBoUgHCU But it's worth pointing out the very big hurdles that still stand in the way of drone food delivery becoming a thing. Google and Amazon are among the companies still working with U.S. regulators on how swarms of delivery drones would safely operate in the skies above homes and businesses. That means some sort of air traffic control system that can help track drones in the sky and perhaps collision-avoidance technologies aboard each drone, especially if some drones fly autonomously without human operators. Drones may also need even better sensors and systems to detect and avoid obstacles such as trees and power lines when making deliveries. If you watch the latest videos showing the Project Wing drones dropping off Chipotle food packages at Virginia Tech, they show the drones only delivering to open areas such as fields or clearings. A $6 drone food delivery to anyone's doorstep or apartment building is still a ways off.