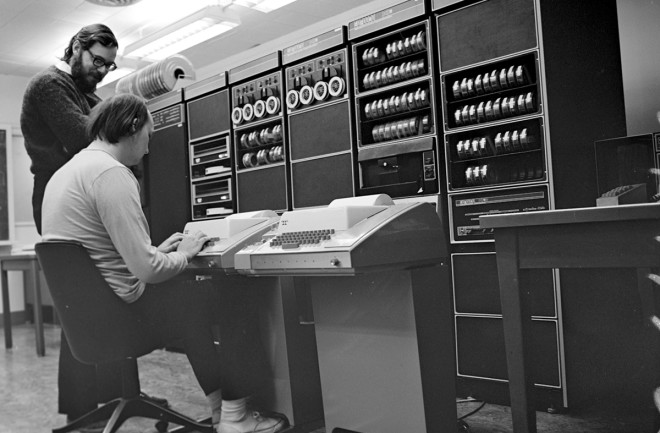 Ken Thompson (seated) and Dennis Ritchie created Unix in 1969. It's still the core of many operating systems. | Courtesy of Nokia Bell Labs

In August, Google set rumor mills spinning when it quietly unveiled an operating system built from scratch. The OS is an open-source project called Fuchsia, and the company has been mum about how it plans to use it. “Fuchsia is a new open-source project that is not at all related to Android or Chrome OS,” says Google rep Joshua Cruz.

Kernels are the central part of an operating system, interfacing between software and hardware. | Dan Bishop/Discover after Kernel_Layout via Wikimedia Commons

The operating systems that drive modern computers originated decades ago. Apple’s OS is based on Unix, first built in 1969. Android uses Linux, developed in the early ’90s. But devices are changing, and those workhorse systems may not be the best fit for cloud computing or the Internet of Things, where companies add connectivity to everyday devices from refrigerators to streetlamps. As a result, “we’re now seeing an explosion of interest again in exploring other OS structures,” says Northwestern University computer scientist Peter Dinda.

To run Fuchsia, Google also built a new kernel — the central part of an operating system that interfaces between software and hardware. Aging kernels tend to be behemoths, which leaves them vulnerable, says the University of Pennsylvania’s Nathan Dautenhahn, an expert in operating systems security. He likens them to the Titanic: “They’re large and brittle and susceptible to attack.” Fuchsia runs on a microkernel called Magenta that minimizes the amount of information in the core, making it more reliable and secure. Dautenhahn says that from a research perspective, Google’s play looks promising. “It could start shifting the culture so we see better operating system designs,” he says.