Glued to Their Phones? Study Says Children Still Watch TV More Than Anything 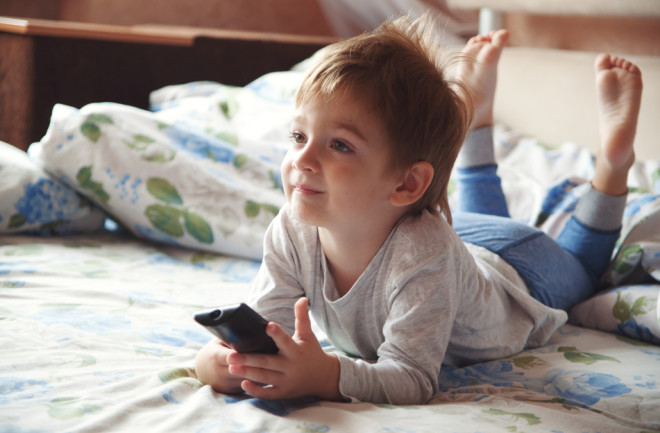 (Credit: Tatyana Korotun/Shutterstock) As technology advances, so do our fears about it. Socrates himself didn’t care for the new advancement of writing. And my parents were always on me to watch less TV. Yet now as a parent, I’m always trying to limit how much screentime my 3-year-old spends with a phone or tablet. After all, everyone knows little kids are drawn to those portable devices like moths to a touch-sensitive flame, right? Not so fast, suggests a study this week in JAMA Pediatrics. Despite that perception, TV consumption is still far greater among children than any other kind of screen usage. Researchers say that any concerns about keeping kids active and their brains properly developing will have to focus more on TV than mobile devices.

The study, by two Florida International University researchers, compared screen time use among kids under 6 in 1997 (before the onslaught of cell phones and tablets) and in 2014. For their raw numbers, they turned to existing diary data from the Child Development Supplement of the Panel Study of Income Dynamics — a much more accurate gauge of time usage than the more common parental surveys, which can take place long after the fact. The researchers tabulated how many hours 1,327 kids spent in front of a screen in 1997, defined as “watching television programs or videotapes, plus time spent on electronic video games and home computer-related activities.” They then compared the findings with those from 443 kids in 2014 — only by now, “screen time activities included the use of television, videotapes, digital video disc, game devices, computer, cell phone, smartphone, tablet, electronic reader, and children’s learning devices.” Quite a longer list! As Socrates would expect, things are worse now: Among kids 2 and under, screen time more than doubled, from about 1.32 hours a day to about 3.05. But, somewhat unexpectedly, the portion of that time devoted to TV-type screens shot up too, from 43 percent in 1997 to 86 percent in 2014. Older kids, 3 to 5 years old, spend about the same amount of time watching screens then as now, but again, TV made up a much larger percentage of it: just 48 percent of total screen time in 1997, but 78 percent in 2014.

The study also compared screen time to different demographic data, such as education and income levels, and found typical correlations there. (Higher income households were more likely to have less screen time, for example.) But overall, the study stayed focused on the counterintuitive TV-related findings: Despite the prevalence (and handwringing over) smartphones and tablets, kids are actually watching more TV than ever. The authors leave it for others to study possible links between such screen time and possible negative outcomes; they just wanted to make sure people know to keep TV in the mix. “As stakeholders warn against an over-reliance on mobile devices,” they write, “they should be mindful that young children spend most of their screen time watching television.” Too much TV: It’s a story as stale as an old rerun, but apparently kids aren’t ready to change the channel just yet.