Glow-in-the-Dark Highway Opened in the Netherlands 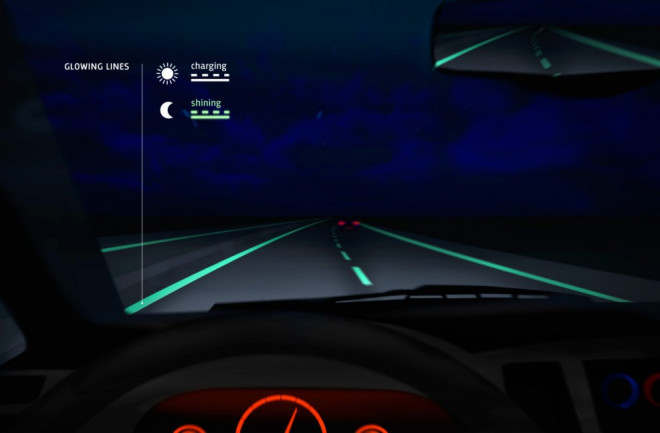 Conceptual image of a "glowing highway." Credit: Roosegaarde Studio If you ask for directions in the small city of Oss in the Netherlands, a local may tell you to merge onto Highway N329 and take the first exit after the highway ceases glowing in the dark. No, you haven’t mistranslated the conversation. Dutch engineers are testing glow-in-the-dark road markings along a 500-meter stretch of N329 to see if glowing roads could someday replace streetlights. The road markings are painted with a photo-luminescent powder that charges during the day and releases a greenish glow at night. Once the paint absorbs sunlight, it can glow for up to eight hours in the dark. The N329 now features a triple-striped pattern of glowing lines on each side of the highway. The experimental project is a partnership between interactive artist Daan Roosegaarde and Dutch civil engineers. Roosegaarde first introduced the concept in 2012, but government bureaucracy added a couple years onto the process, the Independent reports.Rethinking Roadways Glowing road markings are just scratching the surface of Roosegaarde’s ideas for constructing “smart highways.” His team hopes to develop giant road markings, such as snowflakes, that appear on the road when the temperature drops to a certain level. Other conceptual alterations include driving lanes that can charge electric vehicles, and dynamic lane markings that shift from dashed to solid lines based on traffic. "I was completely amazed that we somehow spend billions on the design and R&D of cars but somehow the roads — which actually determine the way our landscape looks — are completely immune to that process," Roosegaarde told the BBC. The glowing lines aren’t without their limitations — hence the testing. For one, an eight-hour glow period is no match for the 13 daily hours of darkness the country sees during winter. Secondly, it isn’t clear how the glowing paint will hold up to abuse from the weather and vehicles. And finally, there's a third, more human, problem: Drivers are turning off their headlights to enjoy the radioactive glow of the road they're driving on.