It was created to research our most powerful weapons, but it's also used to try to protect Earth from cataclysmic destruction. 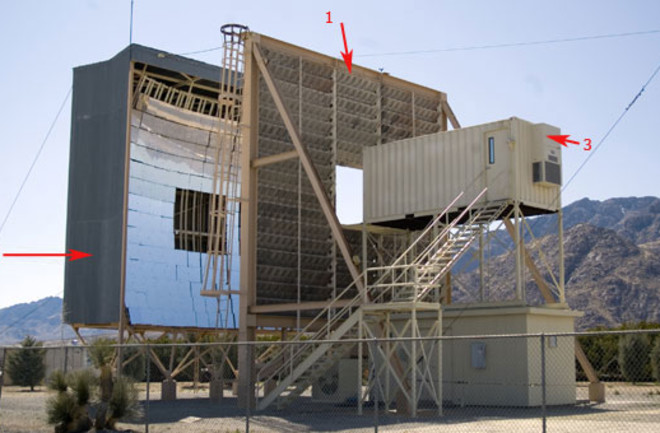 The burst of heat that spreads out from a nuclear explosion is so intense that it can inflict serious burns five miles away. At the U.S. Army’s White Sands Missile Range near Las Cruces, New Mexico, a device called a solar furnace—essentially a three-story-high magnifying glass—routinely simulates the effects of such a blast.

The furnace’s heliostat, a 40-foot-wide panel of 36 mirrors (not visible here), tracks the sun across the sky, reflecting light into the attenuator (1), a grate that can be opened or closed like a window blind. Sunlight that makes it through falls onto the concentrator (2), a concave panel of 180 mirrors that focuses the light into a beam and sends it into a 16-foot-long test chamber (3). There, researchers use an adjustable shutter to control how long objects are exposed to the beam. The furnace can reach temperatures of up to 5,000 degrees Fahrenheit.

Scientists have been doing thermal tests on military equipment at the White Sands solar furnace since it began operating in 1972. Purdue University geophysicist Jay Melosh has a different goal: He thinks a space-based version of the device might be able to deflect a threatening asteroid. It could fly to the asteroid and boil off part of the surface, thereby changing the object’s course. Last year Melosh and Randy Brady, head of White Sands’s Nuclear Effects Division, began testing that idea by blasting meteorite samples in the furnace. Preliminary results look promising. “We opened up the shutter,” Brady says, “and found melting rocks and stuff flying off.”