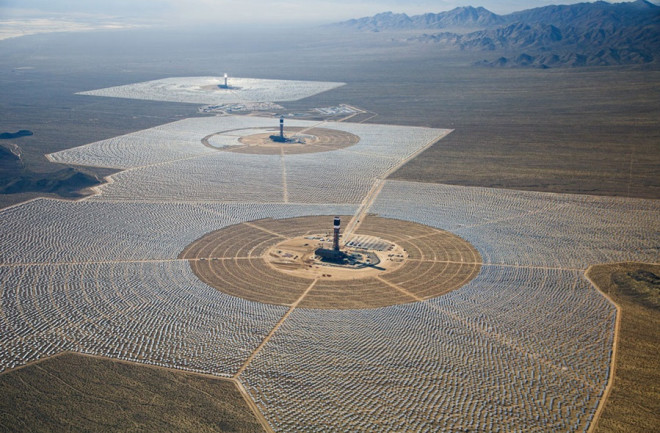 The Mojave Desert’s minimal cloud coverage and high elevation make for the perfect solar-energy terrain. In this parched environment, the Ivanpah project uses air instead of water for cooling. (Credit:Jim West/imagebroker/Corbis)

When the sun rises over the Mojave Desert near the California-Nevada border, its rays now warm a cluster of more than 170,000 mirrors at the world’s largest solar thermal power plant.

The Ivanpah Solar Electric Generating System, spread across 3,500 acres of federal land, started feeding power to the grid in September.

Its mirrors tilt to follow the sun’s arc, redirecting light to water boilers that produce superhot steam at high pressure. As in a conventional fossil fuel or nuclear power plant, that steam spins turbines, which generate electricity. Ivanpah's net turbine capacity — its maximum useable output at any moment in time — is 377 megawatts, enough to power about 140,000 homes.

Challenges ranging from environmental concerns to a dramatic drop in prices for competing solar technologies have meant that “concentrating solar thermal has not yet lived up to its potential,” says Dexter Gauntlett, a Navigant Consulting energy analyst and solar expert. But bringing the Ivanpah project online marks a hard-won success for a new energy model.

[This article originally appeared in print as "Giant Desert Solar Plant Powers On."]