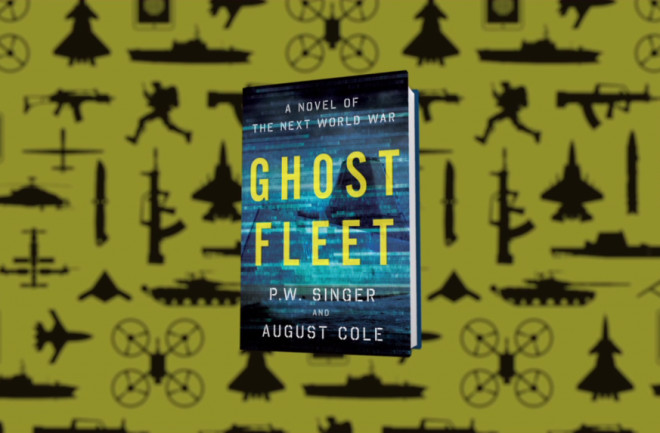 Credit: Houghton Mifflin Harcourt Science fiction books such as "Ender's Game" and "Starship Troopers" have featured on the reading lists of various U.S. military branches for years. Such books provide timeless examples of leadership and reflections upon warrior culture, even if they don't necessarily aim to predict exactly how future technologies will help humanity defeat alien invaders. But sometimes a work of fiction aims to change the way that military commanders, politicians, and technologists think about the wars of the near future. The new techno-thriller novel "Ghost Fleet" envisions how World War III might play out between the U.S., China and Russia based upon real technologies and weapons currently in development. It considers what might happen when China's military-backed hackers attack the Pentagon's computer networks, or how the U.S. F-35 Joint Strike Fighter would perform in a dogfight with its Chinese and Russian military jet counterparts. Newer technologies such as laser weapons and 3D printing also appear in the book's pages. But just as importantly, "Ghost Fleet" uses the allure of a fictional story to draw in readers who might otherwise not bother reading a non-fiction book about how technologies will alter the battlefields of future wars. "We’ve seen time and again that fiction has changed the real world," said Peter Singer, coauthor of "Ghost Fleet" and a strategist and senior fellow at the New America Foundation. "Sometimes it inspires new ideas. Other times it warns of things, helps us heads off dangers and better prepares us for the future." Singer has already written several non-fiction books about how military drones and cybersecurity issues have begun transforming warfare. But he has also done consulting work for Hollywood films and military-themed video games such as the popular "Call of Duty" series. His soft spot for fiction and admiration for past techno-thriller writers—notably Tom Clancy—inspired him to try channeling his expertise into a fictional framework. To write "Ghost Fleet," Singer teamed up with August Cole, a writer, analyst and former journalist covering the defense industry for the Wall Street Journal.

An F-35C Lightning II carrier variant Joint Strike Fighter conducts its first carrier-based night flight operations aboard the aircraft carrier USS Nimitz on Nov. 13, 2014. Credit: U.S. Navy photo courtesy of Lockheed Martin by Andy Wolfe Singer and Cole wrote "Ghost Fleet" as a way to reach out specifically to the leaders and thinkers who could influence the shape of future wars to come. The novel includes plenty of character drama to keep readers hooked; a military family's father-son relationship, a female Marine turned insurgent, and a serial killer who stalks victims in the midst of the conflict. But the story also illustrates the different ways that new battlefields in space and in cyberwarfare will influence the traditional battlefields of land, sea and air. In a departure from most past fiction, Singer and Cole include more than 400 endnotes citing their research and real-world interviews with fighter pilots, Navy ship captains, Chinese military leaders and hackers with Anonymous.

Past and Future of World Wars

"Ghost Fleet" marks a techno-thriller return to the idea of World War III at a time when terrorism has dominated the concerns of the post-9/11 world. Tom Clancy's classic novels such as "The Hunt for Red October" and "Red Storm Rising" envisioned scenarios revolving around the Cold War conflict and World War III, but even Clancy's later novels such as "Rainbow Six" turned more on plots involving terrorists. Still, Singer mentioned Clancy as a huge inspiration for both himself and his coauthor Cole in terms of trying to influence a real-world readership consisting of civilian and military leaders.

"Tom Clancy's books were fiction, but they were hugely influential at every level; from inspiring people to join the military to the president himself asking Clancy to come in and talk about certain issues. The prepublication version of our book is already circulating among a senior military readership. It's being read by people who hadn’t read my prior nonfiction. As I was joking with a military officer, they’re weirdly more likely to read the novel on the airplane than another nonfiction book."

Clancy represents one of the most famous techno-thriller writers of the modern era, but he certainly was not the first to blend real-world military technologies with fictional scenarios. Sir Arthur Conan Doyle is most well known as the author of Sherlock Holmes, arguably the most famous fictional detective. But fewer readers know about Conan Doyle's 1914 short story titled "Danger! Being the log of Captain John Sirius," which Conan Doyle intended to serve as a fictional warning for Britain about the potentially crippling effects of submarine warfare.

Peter Singer speaking at the U.S. Navy Current Strategy Forum on the real world lessons from “Ghost Fleet.” Credit: Peter Singer At the time, many British admirals scoffed at the idea of civilized nations using submarines to torpedo defenseless merchant ships, according to BBC News Magazine. But Conan Doyle's warning soon proved prophetic once World War I broke out in the same year of his short story's publication. In 1915, Germany's submarines began attacking any merchant ships headed to Britain; a blockade strategy that came close to crippling Britain's capacity to fight during the war. More recent Hollywood and TV fantasies of the future, such as "Star Wars" and "Star Trek," have sometimes inspired the U.S. military—along with scientists and engineers—to try making certain technologies into reality. But such science fiction represents epic stories set in fantastical future settings rather than serious attempts to consider how real-world technologies might influence future wars. (For more, see "The Illusion of Star Wars Technology.") By comparison, Singer and Cole specifically crafted "Ghost Fleet" to help leaders grapple with the potential perils of World War III—and perhaps figure out a way to avoid those dangers. "For roughly 50 years, we worried about what would happen if the great powers went to war," Singer said. "Then the Cold War ended, 20 years was spent focused on the peace dividend, and then after 9/11 the focus shifted to insurgency and terrorism. I would argue we are now reentering that era of great power competition."