Getting to Know Pulsars, the Lighthouses of the Cosmos

For some 50 years, astronomers have been drawn to pulsars, a type of dense core left over after a supernova. 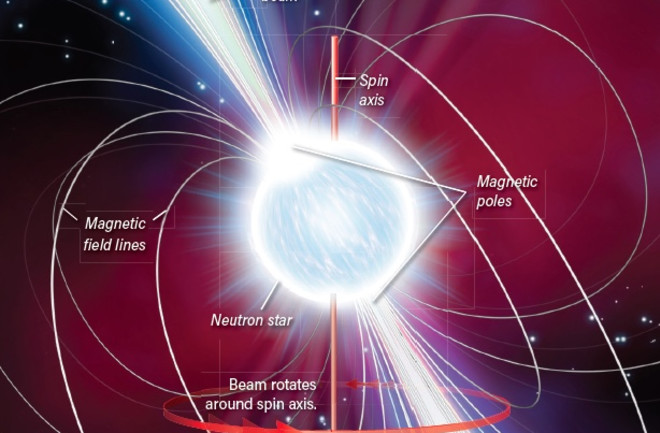 The universe is full of weird objects, but pulsars take the prize as the strangest things scientists can study directly. The shriveled remains of once-mighty stars, they’re around a dozen miles across, have approximately the mass of a sun and can spin hundreds of times per second. They’re also made of a poorly understood particle soup for which researchers don’t have the recipe.

Here’s what we do know: Pulsars are a type of neutron star, the dense core left over after a supernova — a stellar explosion. Astronomers can see pulsars only because electromagnetic radiation, especially radio waves, streams from their magnetic poles. As the pulsars spin, these streams point, once per go-around, at Earth. They sweep over our planet like transient lighthouse beams, and telescopes pick up each one as a pulse.

As part of her doctoral work in radio astronomy, Jocelyn Bell Burnell built a radio telescope by hand — pounding posts, stringing wire, attaching metal. Once it was ready, she was in charge of using it to survey the sky for what astronomers call “scintillating sources” — the radio equivalent of twinkling lights — in a search for special galaxies far, far away. But on Nov. 28, 1967, she discovered something unexpected: a recurring source of radio waves that appeared and disappeared like cosmic clockwork. At first, she called it “scruff.” Then she and her adviser jokingly named it LGM-1, for “little green men.” Today, we call it a pulsar.

So how do those telltale pulses get started? Pulsars have hugely powerful magnetic fields, some of them a trillion times stronger than Earth’s. When magnetic fields spin, they generate electric fields. A pulsar’s spinning fields then whip up a current of particles — electrons and positrons — pulled from the star’s surface. That current travels along the pulsar’s magnetic field lines, spewing radiation from the magnetic poles. “It’s analogous to what produces the aurora on Earth,” says Slavko Bogdanov, a pulsar astronomer at Columbia University. “But this is a much more extreme version.”

Astronomers are currently arguing (nicely) about what might be deep inside neutron stars and pulsars. They don’t actually know, because the pressures and temperatures inside these objects are among the most extreme of any in the universe, and they can’t be re-created in a lab.

But NASA hopes to learn more through its Neutron star Interior Composition Explorer (NICER) mission, an X-ray telescope that literally snapped onto the International Space Station in 2017. Scientists have already discovered that a pulsar and a white dwarf can orbit each other more tightly than the moon orbits Earth. They’re also testing how our descendants might one day use pulsars like GPS beacons to navigate the cosmos without satellites.

Astronomers still want to figure out how massive and how wide pulsars actually are so they can determine the exact density of their interiors — and finally learn what exotic stew must be brewing inside. They’ll also watch for “starquakes” (the stellar equivalent of earthquakes, possibly due to varying rotation rates) and learn how magnetic fields and extreme gravity whip the radiation around. Meanwhile, other teams are using superfast pulsars to search for gravitational waves, the ripples in space-time that result when massive objects accelerate or collide. By watching for pulses that arrive at Earth not quite on schedule, astronomers hope to learn about the weird curves and bends in space-time that can stretch or squeeze the signals, delaying or hastening their travels.

Create Your Own Pulsar (Zoom In!)