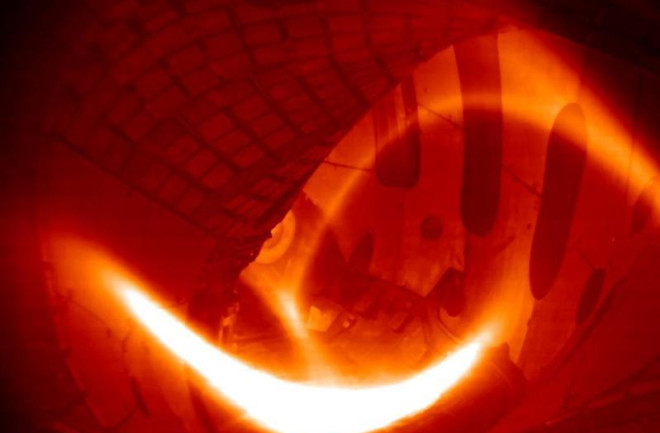 The hydrogen plasma created inside the Wendelstein stellarator, which lasted only a quarter of a second. (Credit: IPP) Scientists in Germany successfully completed another phase of an experiment designed to one day produce nuclear fusion Researchers at the Max Planck Institute for Particle Physics heated up a small sample of hydrogen to over 170 million degrees Fahrenheit using the Wendelstein 7-X stellarator, a donut-shaped device that uses magnetic fields to suspend hydrogen gas while zapping it with powerful microwaves. They succeeded in creating a super-hot plasma, which lasted for about a quarter of a second, according to a news release from the institute. Although fleeting, this experiment successfully demonstrated that plasma can be contained while heated to such extremes, a key step in harnessing nuclear fusion. The Wendelstein stellarator is not meant to produce energy, but rather to test the processes needed to achieve fusion. Wednesday's test was the first of many such hopeful experiments. The stellarator experiment has been in the works for almost two decades now, and has cost nearly $500 million dollars. Germany is the primary backer of the experiment, with additional funding from the U.S., Poland and the European Union.

Harnessing the Power of the Sun

Nuclear fusion offers a means of producing energy that's safer and cleaner than current methods. The process is essentially the opposite of nuclear fission, which is used to power today's nuclear plants. Fission involves splitting large atoms into smaller ones; fusion, on the other hand, combines atoms — typically hydrogen ions — to release even greater amounts of energy. Fusion has been a long-sought-after energy source because it is the most efficient power-producing process we know of. Hydrogen is a plentiful fuel, and unlike fission, fusion reactions create minimal, carbon-free waste. Further, hydrogen is in near infinite supply, so we'd be able to power fusion reactors for a long time. For a dramatic demonstration of fusion's power, just look up toward the sun. Nuclear fusion represents an alluring power source, but getting a fusion reaction started requires huge amounts of energy. Though scientists have produced fusion reactions, the energy input was higher than the reaction's output — that won't exactly cut it as a power source for civilization. Scientists are racing toward what's called ignition, or the pointwhen energy output exceeds input, and the fusion reaction becomes self-sustaining. Turning gases into highly energized plasmas is one of the best ways to reach this level. Nuclear fusion generators such as the stellarator rely on supercooled electromagnets to suspend plasma fuel in mid-air — the super-heated substance would melt through physical barriers. Once contained and energized, the hydrogen atoms separate from their electrons and smash into each other, fusing together and releasing a tremendous amount of energy.

Inside Wendelstein. (Credit: IPP/Wolfgang Filser) Wednesday's test marks the first time the Wendelstein stellarator successfully created hydrogen plasma. Tests in December with helium were carried out at much lower temperatures, and were used to ensure the chamber was clean. The researchers now intend to conduct further tests meant to expand the capabilities of the device. In the coming years, the device will be outfitted with, among other things, carbon panels to protect the walls and a device called a divertor that will remove impurities, according to the press release. The goal is to achieve gradually higher temperatures and preserve the plasma for longer periods of time. Ultimately, the researchers want to create and suspend plasma for up to 30 minutes. By successfully holding on to plasma for 30 minutes, the researchers believe that they will have taken a big step toward satisfying the ignition prerequisites for nuclear fusion. If a perpetual reaction is to occur, where the reactor returns more power than it sucks up, the plasma must be held in its free-floating stasis indefinitely.

The scientists at Max Planck are not the only ones in pursuit of fusion however. An internationally-backed project in France called ITER is building a tokamak generator, another means of producing fusion that also relies on electromagnets. Although similar to the stellarator, tokamaks, which were invented in Russia in the 1950s, are considered much more difficult to operate, and may feature design constraints that the stellarator bypasses. Additionally, in 2014, scientists at the Lawrence Livermore National Laboratory in California used lasers to compress a pellet of hydrogen isotopes until the pressure sparked nuclear fusion. That experiment succeeded in producing more energy than what actually reached the pellet, but a significant amount of energy from the lasers was still absorbed by the container that housed the reaction. In other words, it still took a lot of energy to fire the lasers, and the total output was only 1/100^th of the ignition break-even point. Although there are a number of advances, nuclear fusion is still quite a ways off. Speaking to the Associated Press, a senior scientist with the project, Robert Wolf, said that even achieving the 30-minute mark for sustaining plasma probably won’t happen until 2025 —the stellarator will need ten times more power than it used today. To achieve true fusion, reactors must use energy levels orders of magnitude higher than those used in experiments today. Today's experiment has been hailed as a big step forward for nuclear fusion. Researchers still need to make leaps and bounds for functioning nuclear fusion reactors to appear on the horizon. It's a daunting task, but with the future of the world's energy supply on the line, it is also a necessary one.