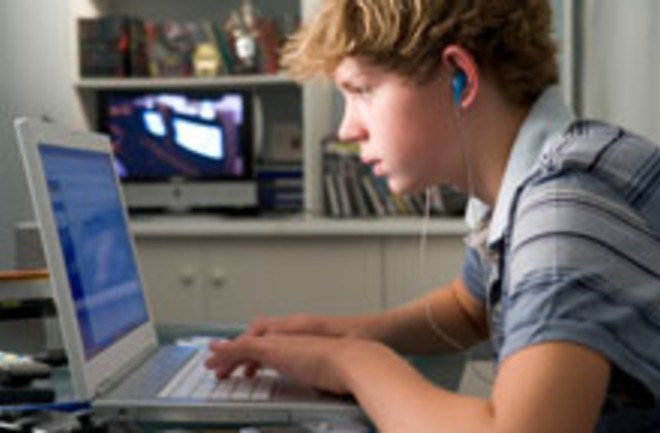 When your kid isn't in class, he/she is probably listening to an iPod, flipping TV channels, or switching between tabs on their computer, which means they may be juggling between Myspace, Facebook, and YouTube--in other words, kids today are staying hyperconnected and wired through their waking hours. That reality is confirmed by a new study done by the Kaiser Family Foundation, which reveals that

if your kids are awake, they're probably online [The New York Times].

In the third of a series of large-scale national surveys, the Kaiser Foundation study found that kids between the ages of 8-18 years now spend an average of 7 hours, 38 minutes per day using entertainment media. That adds up to more than 53 hours of entertainment consumption in a week. And this does not include the time kids spending texting or talking on their cell phones. Unsurprisingly, the report says that all this media consumption could be a factor in kids getting lower grades or having behavioral problems. The report notes: "About half (47 percent) of heavy media users say they usually get fair or poor grades (mostly Cs or lower), compared to about a quarter (23 percent) of light users." Heavy users are the children and teens who devour more than 16 hours of media per day, while light users are those who take in less than 3 hours per day.

The study [also] found that young people’s media consumption grew far more in the last five years than from 1999 to 2004, as sophisticated mobile technology like iPods and smart phones brought media access into teenagers’ pockets and beds [The New York Times].

Blacks and Hispanics, said the study, were the highest consumers of media. When it comes to TV watching, black children spend nearly 6 hours, Hispanics just under 5 1/2 hours, and white youths 3 1/2 hou

rs watching TV each day. According to the report: "

The racial disparity in media use has grown substantially over the past five years: for example, the gap between White and Black youth was just over two hours (2:12) in 2004, and has grown to more than four hours today (4:23)."

The report lists the top online activities as social networking, playing games, and visiting video sites such as YouTube. It also revealed that 74 percent of all 7th-12th graders say they have a profile on a social networking site. But

if you are a parent, there is no need to despair; your child can still be compelled to go play outside. Kaiser executive Victoria Rideout says that rules can be a game-changer.

“I don’t think parents should feel totally disempowered,” she said. “They can still make rules, and it still makes a difference” [The New York Times]