Gaming Treadmill Gets Players on Their Feet

With the new Virtuix Omni gamers can run, jump, duck and twist in virtual reality. 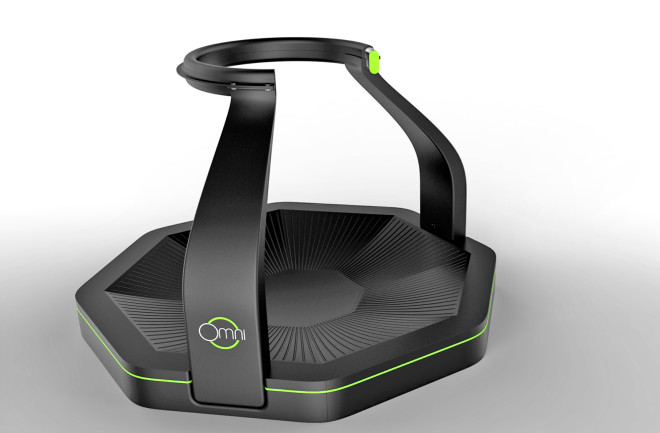 The Virtuix Omni is about to give “entering the octagon” a whole new meaning. Coming in January, the device is billed as the first omnidirectional treadmill that allows natural, full-body movement in virtual reality scenarios such as Call of Duty and other first-person shooter games. Virtuix CEO and Omni developer Jan Goetgeluk explained why couch potatoes have no excuse to stay on the sofa.

A new kind of bowling: The Omni is an eight-sided, concave platform with an adjustable, waist-high stability ring. The bowl-like base is made of a proprietary grooved, low-friction material.

These shoes were made for Skyrim:

Omni users wear shoes designed to work with the treadmill’s dynamics. The sole of the shoe is made of the same low-friction material as the base, with a stainless-steel pin in the toe that fits into the base grooves to stabilize the foot and make natural movement easier. The front tip of the toe area is made of a higher-friction material that acts as a kind of brake so you spend more time strafing and slaying virtual bad guys and less time slipping and sliding.

Don’t console yourself: Although the Omni is compatible with gear such as the Oculus Rift virtual reality headset and Razer Hydra gaming controller, it only works with PC editions of games — it won’t work with a console version.

Tread softly: Early independent reviews of beta versions of the Omni put the noise factor at about the same level as a treadmill, meaning your neighbors likely will never know you’re saving the world from an alien invasion.

Let’s get physical: While you’re doing all the jumping and running, the Omni’s integrated software is translating your motions into keystrokes that drive your avatar in the game. The software can also track calories burned and distance covered.

Jump to it: The stability ring reduces the risk that a bonus round will end in an embarrassing (and potentially painful) flop or fall, but the user is not tethered to the ring, which means jumping and 360-degree turns, as well as walking and running while changing direction, are all possible.

Kickstart this: In June, Virtuix sought funding for the development and production of the Omni via Kickstarter and met an initial goal of $150,000 in less than four hours.

Future fun: Goetgeluk and his team at Virtuix already are planning other less-sweaty applications for the Omni, including virtual museum tours and house walk-throughs for potential homebuyers.

Yes, it will fit in your mom’s basement: The Omni is about 48 inches in diameter and weighs about 110 pounds, though the Virtuix team is looking at ways to reduce the size in future generations of the device. It comes apart easily for storing.

Dear Santa, hint hint: Supporters of the Kickstarter project are first in line when the Omni starts rolling off the assembly line in January, but Virtuix.com is taking advance orders now for a few different package options, which top out at about $600.