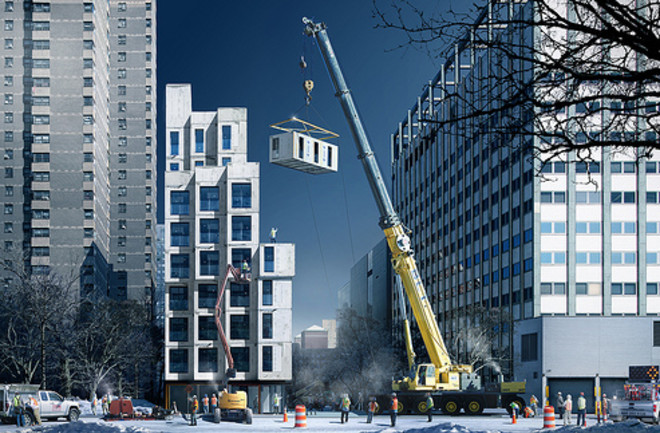 How can New York City cram more people into its already overcrowded and overpriced housing market? To go about finding a creative and cheap answer, the city put a piece of public land up for grabs and sponsored a contest called adAPT NYC. The parameters? Build and operate the city’s first micro-unit apartment building in Manhattan.

The winner's “My Micro NY" design beat out the 32 other submissions by squeezing 55 apartments into the building, each measuring a mere 250 to 370 square feet. The key was to minimize the square footage while maximizing natural light and a feeling of openness. According to the judges, the winning architects achieved this via high ceilings, big windows and multi-functioning spaces. The Juliet balconies didn't hurt either. To escape the confines of these cube-like rooms, a whopping 18 percent of the building will be designated for shared use---lounges, party rooms, a rooftop garden and a fitness center. The thing that sets this building apart from others in New York City is its modular design. Once the foundation is laid and the ground floor constructed, the rest of the process will, in a way, resemble child's play. Individual units will be pre-made off site and then stacked into place like Legos in as little as two weeks. Builders then slap on a brick facade and voila---an apartment complex ready for renters by September 2015. Cheaper construction means cheaper rent, too. Nearly half of the apartments will be slated for low- or middle-income residents. Starting at $914 a month, the rent will be less than half the average cost

of a studio in NYC today. Want to see for yourself? Starting today, the winning design will be strutting its stuff at the Museum of the City of New York in an exhibit called

Rendering of the interior of a My Micro NY apartment. Courtesy of NYC Mayor's Office.