Better nav systems could get us to our destinations faster, and make our roads a smarter system. 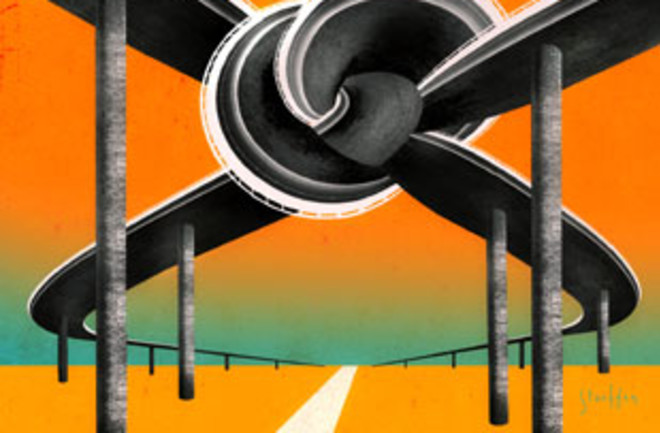 For millions of drivers, those in-car navigation systems inspire something close to full-on techno love. Unless, of course, you’re one of those people who have followed the devices into rivers, onto train tracks, down impassable wilderness trails, or right into another country. Even if you’re not, you should be annoyed that your fancy navigation system cannot solve one of the great scourges of modern life: traffic delays. A 2007 study showed that in the United States alone, drivers spent 4 billion human-hours crawling or sitting on the road that year; those delays cost nearly $90 billion in fuel and lost productivity. Feel free to put your own dollar value on the aggravation. I estimate it in the trillions, just for me.

There is a good reason why you still spend all that time parked on the highway. Figuring out the shortest route between two points is easy to handle for a computer (or a sharp 7-year-old with a good map, for that matter). Figuring out the fastest route—the one that will minimize traffic—is a monster challenge. Sure, you can get traffic updates radioed to your nav system or sent to your cell phone, courtesy of traffic-data providers like Navteq, based in Chicago, and Clear Channel Radio of San Antonio. But by the time you find out that you’re headed into a jam, you’re probably already stuck. And when you call up an alternate route, it may be equally clogged. “Traffic is a very complicated, dynamic system that isn’t easy to optimize,” says Jeff Ban, an engineer at Rensselaer Polytechnic Institute who builds computer models of traffic. What’s missing is predictive traffic routing: a system for finding a path that takes into account not just what is happening now but how the situation is likely to develop over your entire trip, over all possible routes.

Creating such a system requires assimilating vast troves of historical and real-time data on traffic on all relevant roads—about 4 million miles’ worth. Only a minuscule fraction of highways are currently monitored. “Your nav can be off by multiple factors, telling you it will be a 20-minute trip when it’s really going to take well over an hour,” says Quinn Jacobson, an engineer at Nokia’s research center in Palo Alto, California.

But the needed data are finally flowing in, a happy side effect of the fact that nearly all of us now drive around carrying cell phones. In the past year, traffic-monitoring services have begun tracking the movements of mobile phones on roadways. Some 4 million phones now report their speed and position to Nokia-owned Navteq alone; millions more report to other traffic-data services, including Inrix of Kirkland, Washington, TomTom’s High Definition Traffic of Concord, Massachusetts, and Google Maps. Since most of today’s cell phones can pick up GPS signals, the data they generate are highly accurate, typically to tens of feet and a few miles per hour. Those numbers are sent off in much the same way that text messages are, except it happens automatically, without your involvement.

Who would agree to be tracked this way? Well, you yourself probably did if you activated a location-based service on your phone. Your location data are tagged by your phone only with a random identifier, not with any personal information—so the services know where you are, but in theory they don’t know who you are.

Armed with that swelling ocean of information, nav systems are getting better at guessing at traffic-beating routes, sometimes also taking into account sporting events, weather predictions, parades, construction, and school vacations. “We are already tracking a dozen variables per city,” says Bryan Mistele, CEO of Inrix, which offers an iPhone navigation app that delivers predictive traffic-avoidance tips. (If you’re using a built-in car nav or a portable windshield-mounted version instead of a cell phone, you’ll need one of the many new models that receive FM broadcast traffic updates to get the same benefit.) Once the service is alerted to an accident, Inrix’s app can update your recommended route based on how previous accidents at that site affected traffic under similar conditions. Then it can keep refining its recommendations as it observes how traffic is progressing.

Within a few years, travel-monitoring services such as Navteq plan to refine the predictive process by turning you into a real-time, on-the-scene traffic reporter. If you are using a cell phone or one of the high-end, dedicated navs that offer two-way communication, you will soon be prompted to feed the companies information about delays. When you hit your brakes on the highway, up pops a window on the screen of your nav asking one of several questions: Can you see the cause of the holdup? Is it an accident? Is it blocking more than one lane? Have emergency vehicles arrived? The service will route different questions to different navs to keep the process simple. “Each commuter can supply one piece of data,” Navteq senior vice president Howard Hayes says. “We don’t want to distract anyone with six different questions.” You’ll press a button on the screen to answer, or perhaps just say “yes” or “no.” That response will be zipped to the central computers at the traffic service, and updated predictions will be blasted out to all of the companies that rely on the service so that the nav systems of cars in the vicinity can pick the fastest way around the mess. Call it crowdsourced navigation.

And here’s something else your nav may soon be asking you: Do you feel lucky today? The route most likely to be the fastest may also be less predictable than other choices, perhaps because it’s an accident magnet. Again relying on cell phone and roadway data, traffic services are working to identify such risky routes, the ones on which travel time has varied wildly in recent days or months. When you ask your nav for directions, it could ask you when you absolutely must arrive at your destination. If you have a tight deadline, it will avoid any routes that even occasionally clog badly enough to make you late, no matter how fast that route is on most days. If you indicate you have plenty of time, on the other hand, the nav will be free to take a chance on those normally faster but riskier directions. That sort of capability could come solely from nav makers such as Garmin and TomTom, or from the traffic-data service providers like Navteq or Google, but it would most likely be the result of a combined effort. “Everyone’s working on risk assessment in route planning,” says Alex Bayen, an engineer at the University of California at Berkeley who studies traffic flow.

It will be a few years before the data and computer models are solid enough for reliable predictive routing. But in perhaps a decade, engineers claim, navigation systems will start to deliver something even better: less traffic. That’s because they will be coordinating all the drivers’ movements to optimize overall flow. As more people use navs with two-way communication, the traffic-data services will be able to take into account not only where the traffic is but also where those nav owners intend to go. With that information in hand, the services’ central computers will then recommend a customized route to each nav so as to spread out the different routes over as many roads as possible, minimizing delays for everyone. Nokia’s Jacobson says that preliminary, informal discussions between nav-industry players and government agencies about how to approach traffic coordination are already under way. “Everyone has an interest in helping the public be more efficient in their journeys,” he says.

In the shorter term, nav systems may start improving traffic flow simply by no longer directing every driver onto the supposed fastest route, a simpleminded approach that currently funnels everyone heading the same way onto the same roads. “Like in the stock market, a tip everyone has is not much of a tip,” Northwestern University engineer Hani Mahmassani says. Instead, each nav might randomly choose between the standard “fastest” route and several almost-as-fast alternatives, spreading out the traffic flow. That approach would not work as well as centrally controlled traffic distribution driven by live data, but it would still cut down on congestion—and would do so without the need for any coordination among the nav systems in all the vehicles.

The downside is that some of us will not always get the absolutely quickest route; instead we’ll be making an unwitting sacrifice to the greater good. Feel free to complain directly to your nav. But if it sends you into a river, now you’ll know why.