A powered exoskeleton could transform the average joe into a supersoldier

Lamont Drechsel is a mild-mannered mechanical engineer, but right now he looks like the violent offspring of G.I. Jane and Robocop. Clad in camouflage fatigues, he is strapped into a Plexiglas framework hinged at his elbows, hips, and other joints to follow his movements. He kneels, stretches, and casts menacing glances around a machine shop at Sarcos, the Salt Lake City, Utah, engineering firm that made the apparatus. "It's surprisingly comfortable," he says, breaking into a grin. "I feel like I can do pretty much whatever I want." 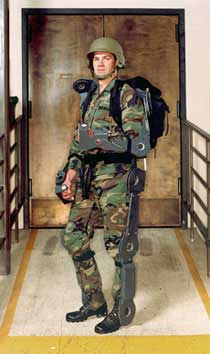 A robotic suit developed by Sarcos mimics the wearer's body motions. The hard part will be squeezing in a power source.Photograph by Michael Kelley

Drechsel's sense of freedom will expand even more once he and his colleagues attach pistons to the hinges, each firing in response to his subtlest finger twitch or leg flex. The result will be an exoskeleton—essentially a powered suit of armor. Such a device could give a soldier a huge advantage in battle. "We want to give our troops at least a two-horsepower augmentation of strength and endurance," says Ephrahim Garcia, who directs the exoskeleton program for the Defense Advanced Research Projects Agency, often called DARPA for short. Last spring, the agency doled out the first grants from its $50 million Exoskeletons for Human Performance Augmentation project to Sarcos, Oak Ridge National Laboratory, and the Human Engineering Laboratory at the University of California at Berkeley. The mandate: Have a legs-only exoskeleton ready for trials by 2003 and a whole-body version by 2005.

Wearing a device built to DARPA specs, a grunt, without grunting, could heft 400 pounds, including bigger weapons, bulletproof armor, better communications devices, and more food, and remain continuously active for at least four hours. Exoskeletons could be optimized for other combat tasks, too, such as running much faster than ordinary humans, jumping over fences, or picking up rubble during rescue efforts. Add a soupçon of artificial intelligence and the suit could save its wearer if he is wounded. "You could send a command to take this guy home," says Stephen Jacobsen, CEO of Sarcos.

The program to create a powered exoskeleton springs from the premise that future warfare will be urban. Soldiers will need to climb stairs, dart through narrow alleys, and leap from rooftops, none of which can be done in tanks or airplanes. But François Pin, who heads the Oak Ridge effort, sees dozens of nonmilitary uses as well. "Construction is a $4 billion industry in this country, and it's very primitive. We are injuring people every day. Cargo handling, search and rescue—the possibilities are endless." Ultimately, exoskeletons could transform society. The elderly could regain the physical abilities of youth, and paraplegics could walk. "This is a dream that's buried in everyone's psyche. Everybody wants to be strong," Jacobsen says.

Because of that deep appeal, the idea of exoskeletons is far from new. Robert A. Heinlein swaddled soldiers in powered armor in his 1959 novel Starship Troopers, and in the 1986 film Aliens, a machine-enhanced Sigourney Weaver slaps around one of the title characters.

Although fiction has outpaced real life, participants in the exoskeleton project believe advances in power generation, microprocessors, and control technologies are finally bringing the dream within reach. "I truly believe that in five years, we will be there," says Homayoon Kazerooni, director of Berkeley's Human Engineering Laboratory. Still, even optimists like Jacobsen recognize the magnitude of the challenge. "There are large technical hurdles at every level," he says.

The main problem is power. Actuators—the robotic equivalent of muscles—must be strong, efficient, durable, controllable, and quiet, none of which is easily accomplished. Sarcos is among the world's leading robotics firms, having built everything from undersea salvage robots for the Navy to animatronic buccaneers for The Walt Disney Company's Pirates of the Caribbean rides. With most such devices, however, "there's a dirty little secret in the next room," says Jacobsen. "Electrical stuff has a big generator somewhere. Hydraulics has a hidden motor and pump. With this machine, you don't get to have that dirty secret." The key to success, he thinks, is to find a way to emulate the efficiency of muscle tissue: "Muscle is so damn good at this stuff. If you took all of the muscles off of a healthy adult male and put them in full contraction, they would lift 20 tons. And they run on carrots."

This hydraulic grasping arm was developed at the University of California at Berkeley for loading and unloading aircraft payloads that one person could never lift unassisted.Photograph courtesy of Homayoon Kazerooni/UC Berkeley

"Each of the labs has a different idea about skinning this cat," says Pin. His Oak Ridge team plans to use a fuel cell to power hydraulic actuators. Sarcos's suit will incorporate a separate, hydrogen- or petroleum-fired piston at every joint, an approach that aims to avoid the losses that plague distributed-power systems. Kazerooni's lab in Berkeley will be experimenting with a pneumatic system powered by hydrogen peroxide. So far, nobody has an actuator that approaches the required efficiencies.

Although power issues remain thorny, control technologies have come a long way over the past decade. In the late 1990s, Pin's group built an artificial arm that responds instantly to commands and can load 4,000-pound bombs into F-15 jet bays. The operator grabs a handlelike device at the end of the arm's framework, and the machine follows his motions, providing force-feedback so he can feel the bomb's weight, shape, and inertia. "We had young guys from the Air Force who had never seen a computer; they were successfully loading bombs with this thing in 15 minutes," Pin says.

But in a whole-body exoskeleton, the force-feedback mechanism must be extremely subtle. Sarcos has extensive experience with building master-slave systems, in which a person wearing a control harness directs the movements of a robot. "We've discovered that humans don't do well under constant load. Even if you have to push with just a pound or two of force, you get tired very quickly," says Jacobsen. The exoskeleton, he says, "should barely touch you but be extremely responsive." Sarcos has pioneered sensors that allow amputees to control mechanical arms through tiny movements of skin or muscle, but whether such sensors can work on a fully clothed soldier in a whole-body exoskeleton remains to be seen.

If any lab does succeed, exoskeletons may quickly appear in a bewildering variety of forms. Kazerooni expects partial versions will hit the market first. "A factory worker might have just a pair of enhanced arms," he says. "There will be many job-specific applications for arms alone or legs alone."

Jacobsen is particularly excited about the potential for powered legs. "About 3 percent of the world can be accessed in a wheeled vehicle, but 85 percent can be reached by something with legs," he says. He envisions a centaur-truck: A human being wears and controls the front set of legs, while one or more leg pairs follow along behind, supporting a flatbed. "You could transport cargo anywhere," he says. Later there could be a market for many types of whole-body suits as well. "Just as there are little cars, big cars, and big trucks, there will be specialized suits for all kinds of tasks," he predicts.

Power is the crucial missing element, Jacobsen believes. Everything else is difficult but doable. "Motors, more than anything else, are what made airplanes possible," he says. "This is similar. People wanted to fly, and the development happened. Whatever gets water, grows. Now, this is getting water."