You, too, can be a supersleuth with a few quick clicks of a mouse

Back in 1987, I flirted briefly with the idea of going to work for the central Intelligence Agency. I had just graduated from college and fantasized about participating in covert operations in distant lands. The recruiter had other ideas, and I ended up spending two days in Washington, D.C., learning about the somewhat less glamorous job of satellite analyst. In those days, much of what the United States knew about the Soviet Union came from surveillance satellites. Imaging experts counted cars in a parking lot to deduce how many people were working in a factory, measured the factory's infrared brightness to estimate its output, or monitored road construction to keep our maps up-to-date. 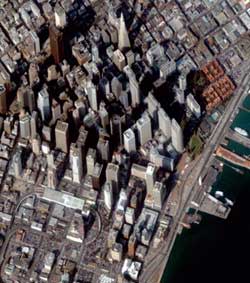 In this post-cold war era, such high-tech surveillance technology is no longer the exclusive province of the CIA or the KGB. Three companies— SPOT Image in France, Space Imaging of Thornton, Colorado, and Orbital Imaging Corporation of Dulles, Virginia— have lofted commercial surveillance satellites, something that was all but unthinkable when I graduated, and more launches are on the way. Meanwhile, the demand for high-resolution satellite imagery is growing exponentially. In 1999, commercial vendors reaped $150 million from satellite snapshot sales; that number is expected to jump to $2.5 billion by 2005.

Intelligence agencies within the United States and abroad have been quick to take advantage of this new source of surveillance photos. "I'd say they're 30 percent to 50 percent of our business. It's only natural that they would be at first, because they understand this technology," says Mark Brender, director of Washington, D.C., operations at Space Imaging. But satellite images with a resolution of about three feet are now available to anyone for a modest fee. Indeed, orbiting eyes are beginning to help an eclectic array of citizens— fishermen, farmers, real-estate agents— do their work more efficiently. "We are seeing this technology move from the black world of intelligence to the white world of commerce, just like GPS and the Internet," says Brender.

Government officials in Maine, recognizing the technology's potential for nonsecretive ends, recently purchased satellite images of the state's entire 33,265 square miles from SPOT. Like CIA image experts watching over Russia, Maine's Office of Geographic Information Systems uses satellite photos to keep its maps current— but strictly for peaceful purposes such as organizing 911 services. The state's old system required driving every new road in a truck equipped with a GPS receiver and a computer, then carefully editing the data. With satellite imagery, a technician simply traces the roads shown on the computer's screen.

Just a few years ago the necessary data might have cost a million dollars. But in the face of fierce competition, SPOT has dropped its prices drastically. Today a collection of 30-foot-resolution images of the entire state costs just $13,000. Meanwhile, other satellite companies are luring new customers with sharper images and speedier service.

Last year, Space Imaging launched the Ikonos satellite, which delivers images more than 10 times as crisp as SPOT's best offerings. And the OrbView-2 satellite, launched in 1997 for Orbital Imaging, is a champ at rapid coverage. By scanning from a polar (north-south) orbit, the satellite acquires a fresh full-color image of Earth's entire land and ocean surface every day.

Looking at the satellite images of the oceans, Orbital Imaging's Mark Pastrone realized they could be useful to fishermen. By analyzing the oceans at eight different wavelengths and comparing the views from day to day, Orbital Imaging can create a map that shows where plankton are blooming; those spots usually indicate prime locations for deep-sea fishing. "We take the plankton maps from OrbView-2 and show captains where fish are located," Pastrone says. "We relay e-mail from our headquarters in Dulles, Virginia, to their boats in the middle of the ocean." More than 100 boats around the world use the service, which costs about $25,000 per boat, per year.

Farmers can use the same type of data to determine where to irrigate and fertilize, because healthy crops reflect more infrared light than crops watered or fertilized improperly. "There are some pockets, growing high-valued crops, where it is being used extensively. There has been some work done with sugar beet growers in the Red River Valley in North Dakota. But people are still struggling with how to make management decisions utilizing this information," says Bob Schoper, an agronomist with Agriliance, which distributes agricultural crop chemicals.

Foresters seem to be catching on more quickly. Steven Lambert, chief technology officer at the James W. Sewall Company, a consulting firm that specializes in aerial photography, mapping, and surveying, says satellite surveillance has become increasingly important to timber companies, which use space-based images to track the state of forests. According to Lambert, satellites can monitor infestations of insects by measuring the light that the forests bounce back. Orbital images can also measure trees' heights by generating stereophotographs taken from slightly different perspectives, or identify the ages and species of the trees via their widths and infrared reflections.

The Internet, the biggest factor driving the widespread use of satellite imagery, makes it possible for people who never considered the benefits of orbital surveillance to browse huge collections, pay for the pictures, and download them instantly. The ambitious leader in this business is TerraServer, developed by Microsoft and now operated by Aerial Images Inc. of Raleigh, North Carolina. Besides selling images from commercial providers, TerraServer has also bought collections from old Soviet spy satellites. When Aerial Images started out 10 years ago it relied on a handful of steady clients, says David Mountain, the company's marketing director. Now that it has a home on the Web, close to half of Aerial Images' revenue comes from single photographs downloaded by customers dropping by online.

Within a year, Web users may routinely encounter satellite images even if they are not looking for them. GlobeXplorer Inc. of Walnut Creek, California, has developed a service for Web sites that takes a street address, finds the matching satellite image, cuts out a small piece, and downloads that image efficiently over a 56K modem. The company offers the service to subscribers such as "real estate agencies with Web sites that want to provide images with their listings of the home and the surrounding neighborhoods," says Barbara Keely, a spokesperson for GlobeXplorer. Prospective homeowners will be able to see whether their dream house sits across the street from a lush grove of trees, a parking lot, or an oil-tank farm.

So 14 years after my job interview with the CIA, it seems I might end up becoming a satellite analyst after all. But the satellite image companies still have to overcome a few obstacles before the technology becomes ubiquitous. Although the satellites record images constantly, transferring the data to Web sites is a monumental task. A brief tour of GlobeXplorer's Web site turned up satellite views of Boston and Seattle but not of my in-laws' house in East Lansing, Michigan. And when I searched TerraServer's site for Cambridge, Massachusetts, I found plenty of images from the 1980s and 1990s but nothing from the past three years.

Cheaper images, better coverage, and broader use of this once cloak-and-dagger technology are just over the horizon. The potential applications will multiply, and that bodes both good and ill. Satellite photos will be coupled with in-car navigation systems. Community activists will be able to peer down on toxic-waste dumps, and municipal governments will have no trouble spotting unauthorized home additions. Suburban dwellers prone to envy might even count how many of their neighbors have backyard swimming pools.I've seen Big Brother, and he is us.

The TerraServer (www.terraserver.com) and GlobeXplorer (www.globexplorer.com) image brokerages also offer free samples and helpful background information about what satellite images are good for and how to buy them.

Curious what kind of information military satellites have been gathering all these years? The Federation of American Scientists has prepared an overview of "imagery intelligence" resources: www.fas.org/irp/wwwimint.html.