No science fiction novel is complete without an appearance of the universal thing-maker. Whether it's called a fabricator, a replicator, or a Mark-12 Hyperduplicator, the basic idea is always the same: a gadget that miraculously creates or copies any object the protagonist desires. The fictional thing-maker may be an abused plot device, but a real one, linked to the Internet and nestled between the microwave and the blender, would be the most exciting domestic appliance ever. Need a comb, a Ken doll, an exhaust manifold for a 1967 Ford Fairlane? Download it. Need another cue stick, fondue fork, crystal vase? Copy it. 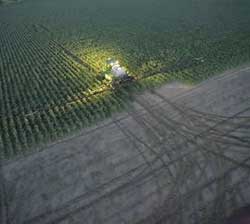 This fantasy is not as farfetched as it sounds. Three-dimensional printers-known in the industrial world as solid-imaging machines-are already here in nascent form, transforming the way products are designed. Once the first home models arrive, in a decade or so, consumer culture may never be the same. "Your children's children will print their own toys," predicts Mervyn Rudgley, senior director of business development for 3D Systems of Valencia, California, the first and largest company in the field. Charles Hull, founder of 3D Systems, expects the technology will eventually lead to the ultimate in on-line shopping: goods delivered directly into the customer's living room.

Hull cooked up the first solid-imaging system in 1984 in a back-room lab while working for a company in San Gabriel, California, that made ultraviolet lamps. Some of the lamps were used to treat special coatings that harden when exposed to ultraviolet light. By extending the process, Hull realized, he could make solid objects from light-cured plastics. Laboring long nights and weekends, he finally persuaded a computer-guided light beam to dance in a precise pattern on the surface of a basin full of gooey polymer. After the jittering beam solidified a thin layer of plastic, a platform just below the surface dropped a fraction of a millimeter, submerging the layer under another coat of polymer, and the procedure repeated itself. Finally, with the topmost layer hardened, the platform rose dramatically, revealing Hull's first creation: a translucent, bluish, inch-tall cup. It still sits in his office. "It's crude," he says, "but it showed what was possible."

Hull dubbed the process stereolithography, meaning roughly "printing in three dimensions." Though he's modest and soft-spoken, he knew he had a winner. "I had the sense right from the start that this would be a big industry. With this, any shape you could design with a cad [computer-aided design] program, you could make."

When Hull unveiled his machine at a Detroit engineering show in 1987, designers snapped it up. Compared with traditional prototyping, which required artisans to carve wood, sculpt clay, or machine steel, stereolithography seemed miraculous. It could translate a computer model of a camshaft or valve stem into a three-dimensional prototype in hours rather than weeks. And a team in Tokyo could electronically send that model to a stereolithography machine in Tennessee, where collaborators could inspect a physical prototype and zap back instructions for revisions.

Soon, designers from dozens of industries began quick-crafting concept models of heart valves, dinnerware, drainpipes, dentures, lightbulbs-almost any object imaginable. Virtually every home in America now contains products prototyped by stereolithography machines. "When you shorten prototyping time so dramatically, you can keep changing and improving the design much more quickly," says Rudgley, who estimates more than 5,000 solid-imaging machines are cranking away worldwide.

Solid imaging also permits three-dimensional copying. At a Los Angeles computer-graphics show last summer, more than 700 people poked their heads into a laser-scanner linked to a solid-imaging machine. Each person was rewarded with a small glimpse at the future: a two-inch-tall, micromillimeter-accurate sculpture of his or her face.

The copied object need not even be visible to the eye. Working with a solid-imaging machine and a ct scanner, researchers examined and replicated a mummy's skull in the National Museum of Antiquities in the Netherlands without unwrapping a single bandage. Several manufacturers of medical implants use solid imaging to model X rays of diseased bones and to create accurate molds for casting replacements such as artificial hip joints.

Applications that seem exotic today will become routine, as solid imaging grows rapidly cheaper and more versatile. A decade ago, the first stereolithography machines cost around $300,000 and could build only plastic objects. Today there are more than a half-dozen related technologies, some of which are far more economical. 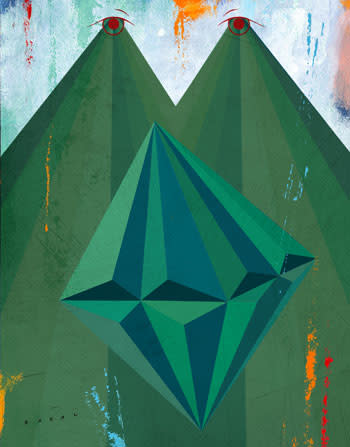 Ink-jet solid imaging is the new cost leader. Your household solid-imaging machine, whenever it arrives, will likely use this approach. Sanders Prototype Inc., in Merrimack, New Hampshire, sells $65,000 units the size of a two-drawer file cabinet. A pair of heads, similar to the ones in standard ink-jet printers, zips back and forth around a platform, spitting out 6,000 microdots of hot plastic per second. Each pass of the heads adds another layer of plastic, building up a three-dimensional object. Ink-jet imaging is slow but precise, perfect for modeling small, finely drawn objects. "Jewelers love them," says Sanders ceo David Bothwell. "They use them to make the actual wax 'positives' used to make casting molds."

Engineers are feverishly pushing the technology beyond plastic so that solid imaging can be used to build finished products, not just prototypes. Devices that can custom-create objects from metal, paper, ceramics, and composites are either in production or close to it. A technology called 3-D printing, developed at the Massachusetts Institute of Technology, uses an ink-jet system to spray a binder and fuse together almost any desired mix of powdered materials into complex, solid objects. In this way, engineers might control composition and shape to create resilient structures that mimic bone, or pills designed to deliver precisely timed dosages of drugs, or machine parts that seamlessly blend metal and ceramic components-a task that is a major headache in the industrial world.

Mass production may give way to mass customization once companies no longer have to bother with slow, expensive, assembly-line tooling. Consumer goods may be churned out to fit your unique lifestyle, body dimensions, and aesthetic whims. You might sketch out a design using a simplified cad program on your home computer, then send it to a local shop that would make your daydream into a reality. "Instead of being stuck with the same telephone that a million other people have, you could have one of your own design," says Rudgley. "This might be just about five years away."

An all-in-one household fabricator is the ultimate frontier for solid imaging. The earliest versions, which Rudgley expects around 2010, will be primitive, capable of making only small plastic objects such as dolls or disposable utensils. They'll be a far cry from a gizmo that can download and "print" a golf club off the Web. Such a machine would have to cast precision parts from many materials and assemble them into a useful configuration. That goal lies over the horizon for big industry, let alone for weekend putters.

But advances like ink-jet solid imaging and 3-D printing show the path. "We're right at the very beginning," says Bothwell. Give the solid-imaging pioneers a few more years of tinkering, and that Hyperduplicator might not look like such a silly plot device after all.