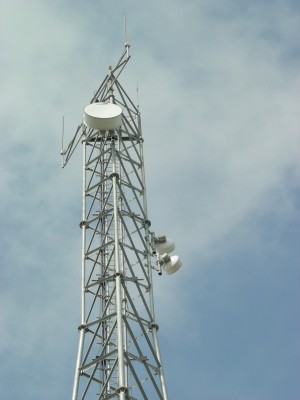 For something that you can't see or touch, the electromagnetic spectrum

sure is valuable property. The auction of a big slice of useful, empty airwaves

. This auction is one thing everyone could agree on amidst all the bipartisan sniping in Congress. That's how much of a no-brainer it is. While the electromagnetic spectrum is fixed by the laws of physics, the use of that spectrum is human and quickly changing affair: global mobile traffic is expected to increase 18-fold in the next 5 years

. WiFi, mobile phones, and radio are all vying for a limited slice of the radio frequency part

of the electromagnetic spectrum. Luckily, we've got a chunk of empty airwaves where analog TV used to be. Mobile phone companies, whose networks are crunched by the hundreds of millions of smartphones we're now toting around, will definitely be in the auction. A proposal to designate a chunk of the former TV airwaves as a free, unlicensed "white space

" may be even more interesting. Tech companies such as Google

have long campaigned for white spaces, with the hope that public access to the spectrum will spur innovation in wireless technology. WiFi currently operates at high frequencies and short range, which is why you have to be pretty close to a coffee shop to steal its free WiFi. Analog television signals, on the other hand, traveled far to get to your TV. These frequencies at below 700 megahertz are the so-called "beachfront properties" of the electromagnetic spectrum because the waves can travel through trees as well as miles and miles of air. The Economist's Babbage blog

has a nice rundown of what this means for the future of wireless browsing. The most practical use of white space doesn't sound that sexy, but it would make a real difference to anyone with a phone:

With spectrum scarce, the mobile-phone companies have been building regular Wi-Fi hotspots as fast as they can—so they can offload data from their congested private networks to Wi-Fi’s unlicensed public bands. Doing so, helps them maintain the quality of service for other customers texting or trying to make phone calls. So far, AT&T has built some 30,000 hotspots to help cope with the tripling in data traffic it has experienced over the past year, with a further tripling expected in the year ahead as the iPad 3 hits the market along with dozens of slicker Android tablets...Like other mobile carriers, AT&T considers unlicensed white space as an ideal way for hauling data back from the hotspots it has built in neighborhoods to its cellular network, without having to use its own precious spectrum.

Long range "Super WiFi" covering a whole city is the more glamorous buzz phrase thrown around. According to Babbage, though, Super WiFi networks running on white space is more practical in rural areas than cities, where there are just so many people and so many gadgets that "download and upload speeds would be no better than clunky old DSL." Hold on sec, there---do you remember when DSL was the fast Internet access compared to dial-up? This changing of hands for prime airwave real estate marks the passing of an era. Television was how the news of previous decades were experienced, from the moon landing up until even September 11