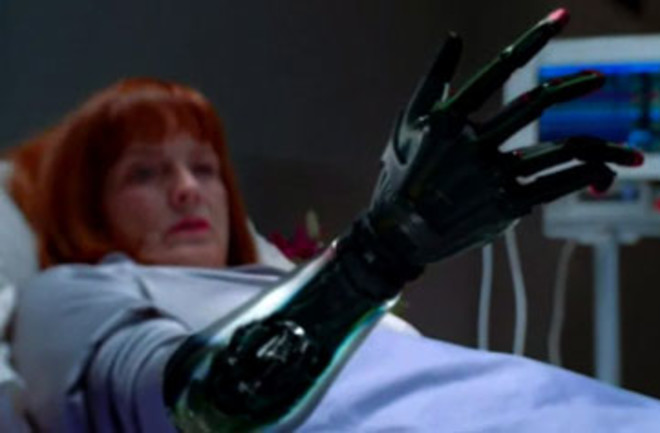 On last night's episode of Fringe, practically the first thing we see is a gunshot wound victim rolling into the ER, but the nice EMT has a surprise for the doctor: The patient has a robot hand! Yep, erstwhile Massive Dynamic rep Nina Sharp has had her hand hacked off, and in its place Sharp has been granted a robot wrist and hand that was probably last seen attached to an Austrian-accented terminator (when it was wrapped in some manly skin, of course). It's got some nice capabilities, this hand: Sharp has full range of motion and dexterity with her robot fingers, something real-world technology still has not achieved. But for all of Massive Dynamics' evil know-how, they're actually behind the times when it comes some elements of hand technology. The most fascinating robot hand has to be the Shadow Hand, which relies on air compression for its "muscle" power. By filling and draining a flexible tube with air, the shadow hand achieves a level of precision not available to typical robotic hands. It can grasp things more gently than traditional robot hands, and it's far lighter in weight than a big all-metal hand. And it has far greater range of motion. Granted, the Shadow Hand is intended for industrial applications rather than attachment to a person, but it seems to offer certain critical advantages that Massive Dynamics might have considered. For an actual prosthetic robot hand, consider the Fluidhand, tested last year in Heidelberg, Germany. It's the first hand to allow individual control of each finger, and it has soft latex pads at the end of each finger to allow for gripping. With these soft, grabby fingers, the hand can make precision movements, like gripping a credit card, that were previously impossible. The hand has been tested only once in daily use, by a teenager born with only one hand, but the operation is a success so far. All of which raises the question of why Sharp even needed a robot hand. In these modern times, surgeons have successfuly transplanted real human hands on to those who once had them. Kentucky-based surgeons have succeeded on four of the five transplants they've conducted since 1999. If Massive Dynamics was going to send in a crack team to help Ms. Sharp adjust her robot hand, couldn't they have just brought her a new one?