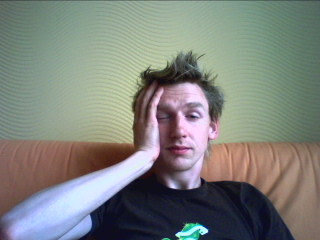 Tis' the season for holiday parties... and hangovers. If you are one of the many who like to indulge at the company holiday party (not that we blame you!), listen up! These scientists set out to determine which liquor makes the next day worse--vodka or bourbon. They had participants drink one or the other until they were legally drunk, and then ran a battery of tests the next day to determine the extent of their hangovers. It turns out that bourbon caused worse hangovers (sorry, my fellow Manhattan aficionados!). Bottoms up!Intoxication with bourbon versus vodka: effects on hangover, sleep, and next-day neurocognitive performance in young adults. “BACKGROUND: This study assessed the effects of heavy drinking with high or low congener beverages on next-day neurocognitive performance, and the extent to which these effects were mediated by alcohol-related sleep disturbance or alcoholic beverage congeners, and correlated with the intensity of hangover. METHODS: Healthy heavy drinkers age 21 to 33 (n = 95) participated in 2 drinking nights after an acclimatization night. They drank to a mean of 0.11 g% breath alcohol concentration on vodka or bourbon one night with matched placebo the other night, randomized for type and order. Polysomnography recordings were made overnight; self-report and neurocognitive measures were assessed the next morning. RESULTS: After alcohol, people had more hangover and more decrements in tests requiring both sustained attention and speed. Hangover correlated with poorer performance on these measures. Alcohol decreased sleep efficiency and rapid eye movement sleep, and increased wake time and next-day sleepiness. Alcohol effects on sleep correlated with hangover but did not mediate the effects on performance. No effect of beverage congeners was found except on hangover severity, with people feeling worse after bourbon. Virtually no sex differences appeared. CONCLUSIONS: As drinking to this level affects complex cognitive abilities, safety could be affected, with implications for driving and for safety-sensitive occupations. Congener content affects only how people feel the next day so does not increase risk. The sleep disrupting effects of alcohol did not account for the impaired performance so other mechanisms of effect need to be sought. As hangover symptoms correlate with impaired performance, these might be contributing to the impairment.” 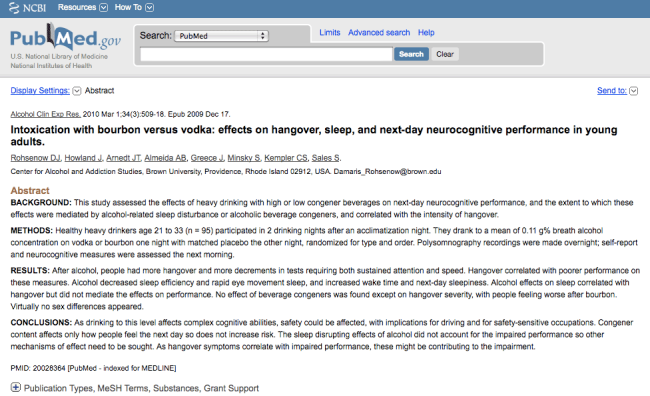