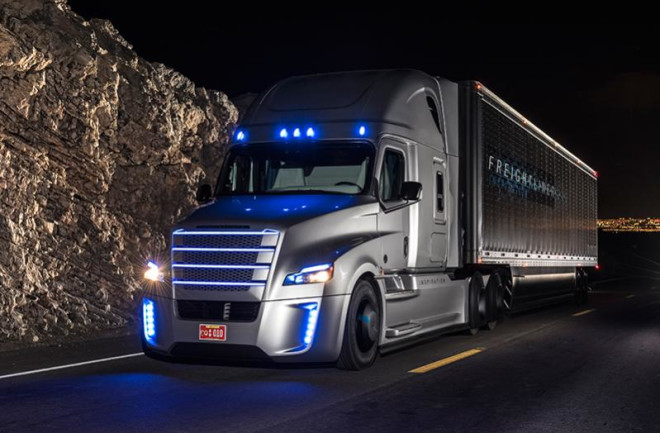 Daimler's Freightliner Inspiration is the world's first self-driving big rig. (Credit: Daimler AG) Most discussions about the future of automated delivery services focus on the allure of flying drones dreamed up by Amazon and DHL. But one company is proving it doesn’t hurt to keep your ambitions grounded. On Tuesday, Daimler AG unveiled the world’s first fully autonomous big rig, the Freightliner Inspiration, during a demonstration atop the Hoover Dam. When safely on the interstate, truck drivers can simply activate the Inspiration’s highway mode and get a head start on office work rather than checking blind spots and switching lanes. Daimler believes the Inspiration will help lower maintenance costs, cut down on drowsy driving and keep the roads safer.

Self-Driving, But Not Driverless

The Inspiration utilizes a complex stereo camera and radar systems to avoid lane deviations and collisions. The system also regulates the truck’s speed, applies the brakes and steers. However, when it’s time to switch lanes, exit the highway or hitch up a new load, the driver takes the reins. Therefore, the Inspiration isn't a "driverless" vehicle but rather an "autonomous" one.

(Credit: Daimler AG) An autonomous big rig will provide relief to drivers on exhausting and boring long-distance routes. Sleepy truckers are a serious concern: Driver fatigue is a leading factor in large truck crashes, which claim the lives of 4,000 people every year in the U.S. Inspiration’s technology allows a driver to focus on other stimulating tasks behind the wheel, rather than catching a case of white line fever. But even more prophetically, Daimler believes their technology will forever change the job of a truck driver: “This will create career opportunities for drivers to become transport managers. The trucker job will become more attractive – autonomous driving is therefore a clear response to the existing driver shortage.”

Daimler still needs to test its system and iron out any flaws before the first automated semi-truck appears on the highway. And currently, only four states and the District of Columbia allow autonomous vehicle testing on their roadways, the Los Angeles Times reports. And there's still a host of legal questions to answer nationwide before testing progresses to implementation.

Nevada's first commercial truck autonomous vehicle license plate is affixed to the Inspiration during the unveiling Tuesday. (Credit: Daimler AG) But as technology and policies continue to evolve, the benefits of building automation in shipping is becoming more evident. You could imagine an automated shipping future from a patchwork of different technologies: your stuff is shipped from China on a largely automated cargo ship, driven to a warehouse by an automated truck, and then taken the final short distance to your house by an automated drone. It's a futuristic possibility that is also increasingly near at hand.