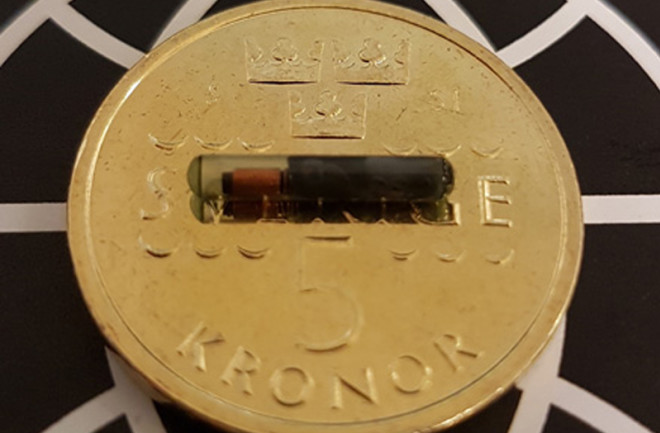 A Wisconsin company will be the first in the United States to implant microchips beneath the skin of its employees.

Three Squared Market (32M), a break-room kiosk company, has offered to give its workers subdermal RFID tags, tiny rice-grain-sized pellets that can hold information like credit card numbers and passwords. With their “handy” chips, they’ll be able to unlock doors, log in to computers, and, of course, buy snacks from the company vending machines—all with a wave of their hand.

A Chip in the Hand…

The chips, which the company emphasizes are completely voluntary, get injected just beneath the skin between the thumb and forefinger. The procedure is quick and simple, requiring little more than a needle. Once securely in place, all employees need to do is hold a hand near a chip reader for it to work, much like a key fob or credit card chip scanner. They say they expect roughly 50 people to take part.

“We foresee the use of RFID technology to drive everything from making purchases in our office break room market, opening doors, use of copy machines, logging into our office computers, unlocking phones, sharing business cards, storing medical/health information, and used as payment at other RFID terminals. Eventually, this technology will become standardized allowing you to use this as your passport, public transit, all purchasing opportunities, etc,” said 32M CEO Todd Westby in a statement.

The company will cover the roughly $300 in costs associated with the procedure, which is being done in conjunction with Biohax, a Swedish biohacking company. Biohax has performed similar operations for the employees of Epicenter, a start-up hub in Sweden, where employees have even begun throwing parties for newly initiated implantees, according to the Telegraph. On Aug. 1, 32M plans to hold its own party for chipped employees.

…Is Worth What Exactly?

The chips will not track employees’ movements or gather other personal information, as they rely on near field communication (NFC) technology, which requires a nearby transponder to generate the power necessary to exchange information. Still, this hasn’t stemmed worries about hackers’ ability to steal information from our chip-enabled credit cards, however. One company even sells wallets, purses and other accessories specifically designed to block the transmission of any information. Such fears may be overblown, however, at least for the moment. So few people have RFID tags, or even contact-less credit cards, that it’s not worth most hackers’ time to attempt to steal them. And even if they tried, they would have to get uncomfortably close to do so.

And though they make life easier inside 32M’s walls, the chips will have little use in the rest of the world. The technology to pay for things with a swipe of the chip-enabled hand isn’t in place in most establishments, as one Buzzfeed writer found out when he tried to go cashless and credit card-less for a month. He did finally succeed in buying a meal with his chip, but only after some custom coding and a whole lot of patience.