Designers of prosthetics and artificial organs have for a long time tried to replicate the human body. From the earliest peg legs to some of the most modern robotic limbs, the prosthetic we make looks like the body part that needs replacing. Lose a hand? Dean Kamen's DEKA arm, aka the "Luke arm," is a robotic prosthesis that will let you grasp an egg or open a beer. The Luke arm is a cutting edge piece of technology based on a backward idea – let's replace the thing that went missing by replicating it with metal and motors. Whether it's an artificial leg or a glass eye, prostheses often seek to reproduce not only the function of the body part, but the form and feel as well. There are good reasons to want to reproduce form and feel along with function. The first reason is that our original bits and pieces work quite well. The human body as a whole is a natural marvel, let alone the immense complexity and dexterity of our hands, eyes, hearts, and legs. No need to reinvent the wheel, just replicate the natural model you've been given. The second, less obvious reason, is that we as a society have been and remain deeply uncomfortable with amputees and prosthetics. Many people don't know what to do when faced with an artificial arm or leg. I wish it were different, but it largely isn't. So prostheses are designed to look like whatever it is they replicate to hide the fact that the arm or leg or eye isn't biological. That methodology is being challenged by a few recent innovations: Össur's now famous Cheetah blades, Kaylene Kau's tentacle arm, and the artificial heart with no heartbeat. These new prostheses and artificial organs are a result of approaching the problem by asking "What does this piece allow us to do?" not "How do we build an artificial one?" The implications for how humans will view themselves in the coming decades are monumental. There are three major ways in which non-standard prosthetics and artificial organs will change the way we come to understand the human form.

The first is a continuation of a current trend already underway: a serious questioning of what a "normal" person should look like. Tattoos, piercings, plastic surgery, sub-dermal implants represent voluntary challenges to the normative standards of human appearance. As more and more soldiers return home from Iraq and Afghanistan amputees and paraplegics, the average person's exposure to someone who needs and wears a prosthetic is far more likely. Carrie Davis, an amputee advocate and surrogate mother, runs Camp No Limits, a summer camp for children who use prostheses where they discover they are neither alone nor abnormal. Millions of people need some sort of mobility assistance, prosthetic, or artificial organ. They are our friends, family, co-workers, and customers. De-stigmatizing their condition is essential for both improving their daily quality of life and progressing as a civilization. Nature Doesn't Know Best: The second is a de-mystification of nature. Evolution is lazy and a cheapskate. Natural selection doesn't ensure that the best form evolves, merely that the slightly better form is preferred. What does that mean? It mean we delude ourselves that we are the "most highly evolved species" when so many of us wear glasses and are susceptible to sinus infections, lactose intolerance and appendicitis. It also means that just because the human hand is amazing, it isn't the end-all-be-all of grasping, touching, and manipulating. Elective amputations due to non-amputating injury are the start of the process of recognizing that we might be able to build a better grabber. However, given enough time and technological progress, voluntary amputations by otherwise healthy, uninjured individuals may become commonplace. Showing that a prosthetic can serve all the functions of a hand or foot without having the same form is a huge blow to anyone who doesn't think the human body could have used a few more revisions on the drawing board. In the future, natural hands and legs might just not be good enough for those who have access to the best in prosthetics technology.

The final change will be an aesthetic shift. Prosthetics may be designed the way the best pieces of consumer technology are today. If elective amputations ever become even remotely normal, you might find yourself in a virtual fitting room, swapping among various forearms and terminal attachments. Aimee Mullin's famous "My 12 pairs of legs" TED speech shows the very beginnings of this trend. Because the form follows the function, there is actually more, not less, freedom for designers. Whatever attaches to your shoulder just needs to be able to open a drawer, pull on pants, type a message, and put in a contact lens. Prosthetics design could help redefine beauty. So long as it does that, the prosthetic can be neon green and see-through for all anyone cares. By focusing on function, the form is liberated. It's easy to say that these trends will change the way we see other people and ourselves, in particular those who are amputees. It's hard to know how a crowd would react to a woman with a tentacle arm or how it would feel to rest your head on someone's chest and hear not a heartbeat but a constant whir. Disorienting doesn't even begin to cover it. To give you an idea of where we're heading, I'd like to end with an anecdote. Last week I was on St. Mark's Place in Manhattan. For those of you unfamiliar with St. Mark's Place, it's one of the more eclectic gathering places in New York City. You'll find NYU students, old school residents who've been there for decades, baffled tourists looking to buy some cheap sunglasses and an "I Heart New York" t-shirt, East Village punks, SoHo spillover, western otakus, and hipsters galore. One of the bars has a bouncer who wears a conical hat in all seriousness and I'm pretty sure one of the record-holders for most facial piercings frequents the block. If you want to see interesting people, it's a veritable buffet. Yet, last week, one of the people who caught my attention was a blonde in her 20's walking with a few friends. Among the crowds festooned with mohawks and jeggings, I might not have even noticed her. Just a cute girl in a t-shirt and jean shorts. All but for the fact that her right leg was, from mid-thigh to sneaker, made of metal. Her knee was a visible hinge. This was not a prosthetic designed to "look normal" and she made no effort to hide it under pants or a long skirt. I use my language here carefully when I say I was struck by how unbelievable it was that her leg was prosthetic. Visibly, it was obviously artificial. But nothing about the way she carried her self, the way she talked to her friend as they ambled down the street, the way in which crowds ignored her and she didn't notice them, was strange – which is what made the whole experience so odd. Among New York crowds, I expect people to gawk. But that her right leg was a prosthetic was a non-issue. People were so disinterested that I had to ensure I, myself, was seeing what I thought I saw. No one cared. That disinterest heartened me because the idea of "nothing to see" is extremely difficult for our brains to process when we are looking at a deviation from the human form. As we are exposed to more and more prosthetics that get the job done rather than act as awkward disguises, the more our brains flex and flow around the idea of what a human looks like. The benefit is two-fold: 1) those who need prosthetics get devices that actually let them do what they need to do and 2) amputees and prosthetics are no longer hidden, but humanized and normalized. And we're only at the very beginning. I can't wait to see what inhuman innovations the prostheses of the next few decades will bring. 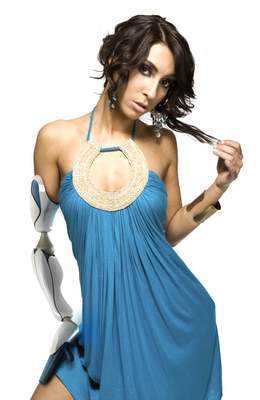