For the Driver Who Has Everything: An Augmented Reality Windshield From GM 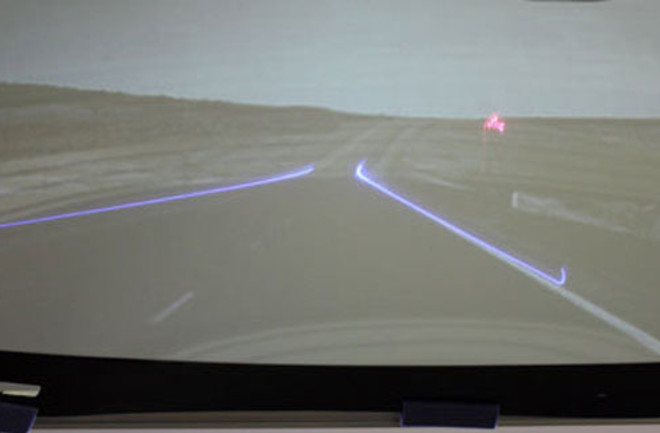 If you haven't already cluttered your car with talking gadgets and navigation systems, then here's something else you might want to pop into your driving machine one day: a new augmented reality windshield that's being developed by General Motors. While the windshield is still years away from the assembly line, car enthusiasts and tech geeks are already getting excited about the idea. The "enhanced vision system" aims to help drivers navigate through dark or foggy conditions. The system would alert the driver by highlighting landmarks or outlining obstacles like a running animal on the windshield to help the driver avoid collisions. Here's how it works. A bunch of forward-looking sensors, including infrared sensors and visible cameras on the windshield, gather data on the external environment. Three other cameras inside the car track the driver's head and eyes to determine where he is looking. Both sets of data are then paired up so that the enhanced views can be projected on the windshield, overlaid over the actual scene outside the car. This enhanced view or "augmented reality" would clearly point out obstacles on the road, so the driver can avoid them. GM suggests that GPS directions could also be projected onto the glass, so the driver doesn't take his eyes off the road. Technology Review explains:

To turn the entire windshield into a transparent display, GM uses a special type of glass coated with red-emitting and blue-emitting phosphors--a clear synthetic material that glows when it is excited by ultraviolet light. The phosphor display, created by SuperImaging, is activated by tiny, ultraviolet lasers bouncing off mirrors bundled near the windshield.

This may all sound a little distracting for the driver. But Thomas Seder, the lab group manager for the Human Machine Interface Group at GM, says: "We definitely don't want the virtual image that's on the display to complete with the external world; we just want to augment it." Technology Review reports that the augmented reality windshield is not the first of its kind:

Head-up displays (HUDs) are already used to project some information--like a car's speed or directions--directly in front of the driver, through the windshield, or even through a side view mirror. These sorts of displays have started appearing in high-end cars, and typically work by projecting light to create an image on part of the windshield.