For Bees, Solving Tricky Math Problems Is All in a Day’s Work 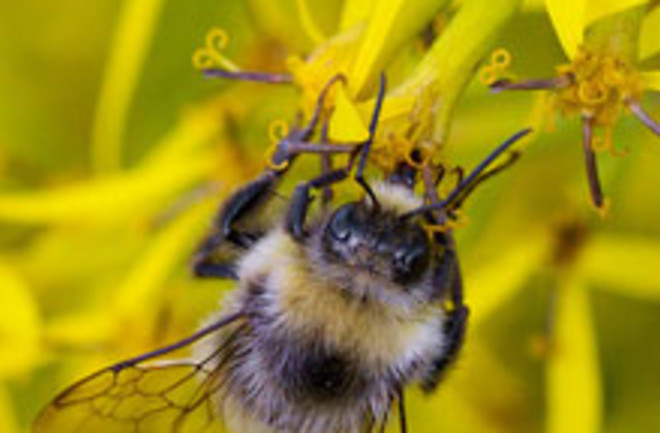 Having a bee brain might not be so bad after all, since new research shows that bees are faster than supercomputers when it came to solving one of those dreadful "word problems" from (probably very advanced) high school math class. Co-author Mathieu Lihoreau explained the significance of this discovery in a press release:

"There is a common perception that smaller brains constrain animals to be simple reflex machines. But our work with bees shows advanced cognitive capacities with very limited neuron numbers."

The problem is called the traveling salesman problem

, and the bees' lives actually depend on solving it every day. The traveling salesman needs to visit a number of cities in the shortest amount of time, without repeating a visit. The traveling bumblebee needs to visit a number of flowers everyday, while expending as little energy as possible. Queen Mary University of London researcher Lars Chittka

explained in the press release

why studying bees' habits is important:

The supercomputer is able to solve a traveling salesman problem by comparing the length of all of the possible routes and choosing the shortest. Mathematicians (and their computer lackeys) haven't been able to figure out how to accurately compute the best answer (instead of just comparing each option). But somehow, the bees are also able to find the right answer as quickly and correctly as humans do when the problem is presented visually. From the press release

Finding a way to quickly and easily compute the shortest distance between a variety of points could also be useful to researchers studying the flow of traffic along streets, the communication of information over the Internet, business supply chains, and even DNA microchips. Related content: Discoblog: German Bees Report for Duty as Pollution Inspectors

DISCOVER: Birds and Bees Do the Locomotion