For a Low-Cost Invisibility Cloak, Physicists Look to Crystals 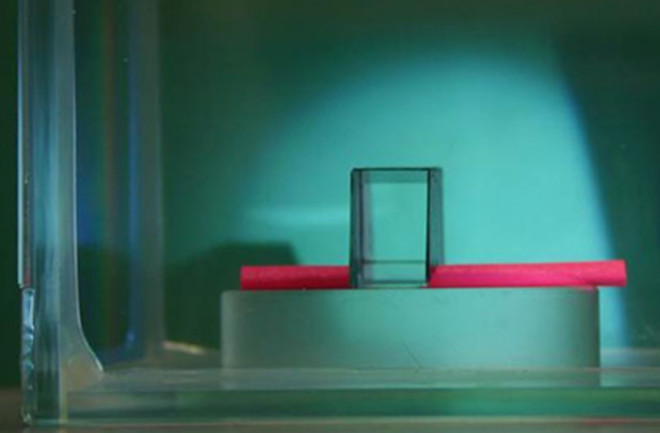 Forget about fancy metamaterials that can make microscopic objects invisible--researchers at two different universities have independently shown that larger objects can be rendered invisible using a mineral that's both naturally occurring and common: calcite. This latest step in physicists' ongoingquest to create an invisibility cloak come from an MIT lab, with a paper published in Physical Review Letters, and a University of Birmingham lab, whose paper just came out in Nature Communications. Both teams explained that they used calcite to make objects that are large enough to be seen with the naked eye invisible.

"By using natural crystals for the first time, rather than artificial metamaterials, we have been able to scale up the size of the cloak and can hide larger objects, thousands of times bigger than the wavelength of the light," said Shuang Zhang, the University of Birmingham physicist who led the research.... "This is a huge step forward as, for the first time, the cloaking area is rendered at a size that is big enough for the observer to 'see' the invisible object with the naked eye." [BBC]

The researchers constructed their cloaks from two glued-together calcite crystals, which have a convenient optical property called birefringence--that means they can bend a ray of light in two different directions. Then they placed the objects to be concealed in a notch beneath the crystals.

In both experiments, researchers had to finely tune their crystals—they’re technically composite crystals, as the researchers basically glue together two crystals with opposite crystal orientations—then placed them over small but entirely visible objects (MIT used a small metal wedge the size of a peppercorn; Birmingham went bigger, concealing a paperclip). In both experiments, the calcite crystals essentially reflected and refracted the light coming through in such a way as to conceal the objects on the other side, making it appear as though they weren’t there. [Popular Science]

While this research opens up an entirely new area for invisibility studies, there's still a long road ahead:

“It’s not a Harry Potter cloak,” says Shuang Zhang, a physicist at the University of Birmingham in England and one of the Nature Communications study coauthors. The cloak works only under one light polarization. And while it works at all angles, it’s not three-dimensional. It only cloaks when Zhang aims the light source dead-on at the crystals. But, he says, scaling up to 3-D isn’t too big of a leap from 2-D. Zhang imagines similar technology one day concealing submarines on the sea floor. [Science News]

The best news is that this invisibility cloak is only limited by crystal size. And with the largest documented calcite crystal measuring nearly 23 feet in length, I'd say this is one concept that holds a lot of potential. Related Content 80beats: 4D Invisibility Cloak Bends Time as Well as Space 80beats: The 3D Invisibity Cloak: It’s Real, But It’s Really Tiny 80beats: New Version of Invisibility Moves Closer to Visual Cloaking DISCOVER: How to Build an Invisibility Cloak DISCOVER: Invisibility Becomes More Than Just a Fantasy Image: Baile Zhang / G. Barbastathis / SMART Centre //