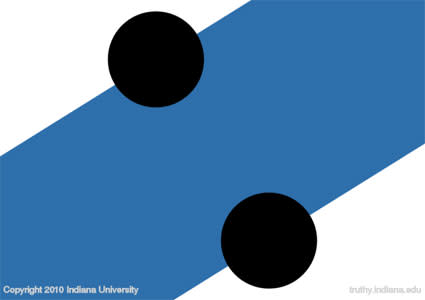 Last week an account going by the name @PeaceKaren_25 was suspended by Twitter.com. We wouldn't normally care about some spambot getting picked off, but PeaceKaren is important because she wasn't peddling porn or popups--she was a political puppet. Karen and her sister account @HopeMarie_25 are examples of political "astroturf," fake Twitter accounts that create the illusion of a "grassroots" political movement. In the diagram above, the two accounts are connected by a very thick band, which indicates that Marie constantly re-tweeted everything Karen said. Together they sent out over 20,000 tweets in the last four months promoting the Twitter account and website of Republican congressional leader John Boehner. Such messages were cataloged and analyzed by Indiana University's Truthy project, which takes its name from Stephen Colbert's concept of "truthiness." The goal of the project is to seek out propaganda and smear campaigns conducted via false Twitter accounts.

"To avoid detection by Twitter, duplicate tweets are cleverly disguised by adding different hashtags or subtly tweaking the web addresses," said IU research associate Bruno Gonçalves, who is mining the stream of tweets. "This gives the appearance of a lot of different people sharing the same views, while in reality the bots are flooding the Twittersphere with one coherent political message." [Press release].

To find political spammers, the researchers analyzed the Twitter network, asked users to report suspicious accounts, and tracked the origins of hot memes

that saw sudden spikes in usage.

"We think this technique must be common," says Filippo Menczer, an associate professor at Indiana University and one of the principal investigators on the project. "Wherever there are lots of eyes looking at screens, spammers will be there; so why not with politics?" [Technology Review].

Other memes implicated in possible astroturf campaigns include the hashtag #ampat

which links to a website displaying pro-Palin and anti-Muslim propaganda. Though these examples may suggest that the Truthy group has a political bias, they deny that their program is picking and choosing the memes it tracks. The researchers say their results simply reflect the volume of tweeting and popular hashtags produced by the conservative right during this election cycle.

"We looked really hard for any 'truthy' memes from the left, but unfortunately we could not find any. I am sure this is not because they don't exist, but rather because there is just very little traffic on Twitter from the left this political season," he said. "The conservative side is creating huge amounts of traffic. Almost all of the most popular hashtags, the most active accounts, and the most tweeted URLs, are from the right. So a large majority of what we are able to track is from the right--both authentic and 'truthy.'" [Press release].

What remains to be seen is if these Twitter campaigns have any real influence. Social computing researcher Bernardo Huberman

In a study that successfully predicted the popularity of movies based on Twitter activity, [Huberman] found that legitimate movie studio Twitter campaigns were largely ineffective compared to honest mass opinion. [Technology Review].

, or check out these neat visualizations from the New York Times

Discoblog: How To Make Your Twitter Followers Uneasy: Use ShadyURLs