To astronomers and earth scientists, balloons aren't toys; they're serious tools that allow a good view without the cost of launching a satellite. But in flight, research balloons must vent helium each time they are heated by the midday sun. They also bob up and down annoyingly and stay aloft no more than a week or two. So NASA engineers have created a pumpkin-shaped floater that can hang steadily at 115,000 feet and stay there for 100 days.

The ultra-long-duration balloon is made of a lightweight three-ply polymer, about as thick as plastic food wrap. The polymer can withstand high pressures as the balloon heats and cools over the course of a day, so it can stay completely sealed. No gas escapes. Fiber tendons, which form the lobes of the pumpkin, bear the weight of the payload and eliminate strain on the thin skin.

In a test run last June, a scaled-down pumpkin balloon flew for 30 hours without losing gas or altitude. The full-sized version, now under construction, will be the size of a football stadium and able to haul 3,500 pounds of payload— including, perhaps, telescopes to rival the Hubble Space Telescope. Its test flight is set for January 2001. 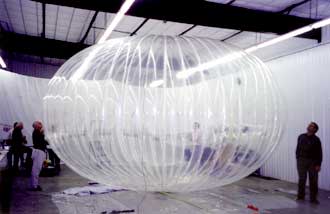